The Biggest Red Sox Busts Of All Time 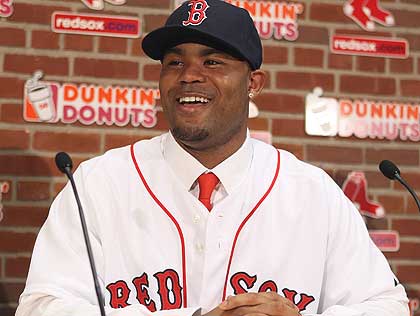 As we write this, we’re rapidly closing in on the trade deadline for 2019. We don’t know who – if anyone – will be coming into the team before the door slams shut on Wednesday, July 31. From what we’ve seen so far, if anyone does join it’ll be a lesser-known name rather than one of the more established players the Sox have been linked with in the press. Despite all the excitement earlier in the week, Edwin Diaz now seems to be out of the question. If things have changed between right now and the time you read this, and Diaz has joined, we’ll be ecstatic. Sadly, we think it’s much more likely we’ll be disappointed.

However badly the last two trades have gone, it’s unlikely that anyone who’s signed would feature on a list of the worst Red Sox busts have all time. When we get disappointed with signings, or irritated with our failure to land a marquee name, we should probably take a second to pause and think about all the times we thought we’d got it right in the past, only for it to turn out that everything had gone disastrously wrong. If you need that perspective in your life right now, here are the worst Red Sox busts of all time.

Daisuke Matsuzaka
To understand the Matsuzaka situation, you first have to understand the scale of the gamble that was taken on him. Let’s say, for example, you took your mobile phone out of your pocket right now. Let’s say you logged on to a mobile slots website, and clicked through until you had a list of all their games. If you spent a single dollar on every single one of those mobile slots and hoped to pull off the jackpot on every single one of them, you’d still be taking less of a gamble than the Sox were when they brought Matsuzaka in from Japan. If there are hundreds of mobile slots on the website like KongCasino.com you’ve chosen, chances are one of them will pay out big from a one-dollar bet. Matsuzaka was unable to do the same in return for the $100m gamble the Sox took on bringing him in. He was a sensation in Japan, and he had a cool-looking windup, but Japan is not the MLB, and looking good isn’t the same as playing well. Two seasons of intermittent good form finally collapsed into a 17-22 record, and Matsuzaka was on his way out. Some columnists of the era queried whether he was really a bust. We’re happy to clarify this for them: Yes, he was.

J.D. Drew
Being a bust doesn’t mean you’re an awful player. It doesn’t even always mean you were bad when you were at the Sox. Sometimes, being a bust just means that you didn’t live up to the expectations people had of you. When you come in as a #1 draft pick, those expectations were high. If J.D. Drew had arrived in Boston via any other kind of acquisition, history would probably be kinder in the way he’s viewed. We can’t change history, though, and nor can Drew change the fact that he never achieved his potential. Drew’s $14.5m-a-year contract established him as one of the big earners, but he played like a mid-range guy. The time he played in didn’t help him much either – the Sox frequently had the fans on their back due to on-field failings, and an ineffective Drew frequently caught the worst of their wrath. His time with us wasn’t a happy one.

John Lackey
If you’ve ever thought you saw something or someone beautiful in the distance, and then got closer to find out what you were actually looking at was as ugly as sin, you know exactly how Red Sox fans feel about John Lackey. He looked like an incredible pitcher for the Anaheim Angels, and had exactly the kind of straight-talking blue-collar background that should have made him a surefire hit with the fans. Big money was spent to bring him in on a five-year deal, but John Lackey’s ability failed to make the journey to Boston. John Lackey was here, but he was an empty shell of the pitcher who’d defined himself in Anaheim and Los Angeles with style. He spent much of his time injured, in bars, or both at the same time. Few tears were shed when he left four years later with a 47-43 record four seasons later.

Steve Avery
With the other names we’ve mentioned so far, it’s at least possible to tell what the Sox coaches of the time thought they were doing by bringing the players in. With Steve Avery, there’s no such explanation. Avery had once been one of the best pitchers in the sport, but a severe injury in 1993 robbed him of his edge. He was 47-22 before damaging a muscle below his pitching arm. His record after coming back from the injury was 44-50. If the injury had happened while he was at the Red Sox, then it would be unfortunate, but he didn’t turn up in Boston until 1997. Despite the obvious and rapid decline in his form, Avery was made the best-paid pitcher on rotation. He stayed for two years, and won only sixteen games during that time. At times, it was impossible to look at him with anything other than pity.

Carl Crawford
If you ever meet a Red Sox fan who tells you that anyone other than Carl Crawford is the worst signing that the team has ever made, it’s because they’ve deliberately forced themselves to forget that Carl Crawford ever existed. $142m was invested in Crawford for what was anticipated to be a hugely successful seven-year career in Boston. That contract would have expired last year. By then, Crawford had retired from the Dodgers after a spell with them that was almost as dire as his two-year stay in Boston. Crawford couldn’t stay fit, and at times didn’t seem interested in staying fit. He had multiple surgeries, gained weight, and won no friends in the city. On his way out, he called the Red Sox a ‘toxic baseball environment,’ and had no kind words to say about the whole Boston area, claiming it made him depressed. It’s doubtful he was as depressed as the Red Sox fans who parted with money to watch him make his occasional appearances during those two years, during which he stole a miserly 23 bases and batted .260.

What do you think? Have we been too harsh on somebody? Have we missed out an obvious candidate? Hit us up on social media and let us know!