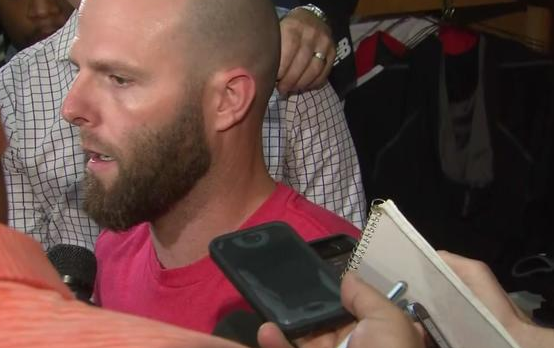 The wheels keep falling off the Red Sox wagon. Porcello can’t buy a win. The offense never comes through in the clutch. X and Jackie seem to have been sucked into a vortex. Pricegate is draining all the energy out of the room. And the team has slipped into second place.

It’s at times like this that a leader has to step up in the clubhouse, slap everyone upside the head, and get the team back on track. Sadly, David Ortiz, who specialized in this sort of thing for the past 15 years, is off to greener pastures. So the job has to fall to someone else. But who?

The natural answer around these parts seems to be Dustin Pedroia. But this is the same guy who just a few months ago threw his pitcher under the bus during the whole Manny Machado affair. Does that sound like a guy who’s got the goods? Perhaps not, but Pedroia still fancies himself the Man with the Plan. When asked about team leadership, the Elf responded thusly:

“I’m standing right here. Been here for a long time. We’re in first place. So, that’s it. Write what you guys want. Here I am. [Don’t see] anybody else standing up doing this, do you? Do you? Nope. Fact. There’s your source. From the mouth.”

I admire Pedey’s willingness to accept the mantle and step it up. But I can’t get over the whole Machado bit. That was one of those moments when team unity could have been solidified, and he sliced and diced. After that, he’s gotta show me a little bit more than making the angry face and dropping cuss words when the cameras are on. A leader saves that shit for the clubhouse.

But this I do know: the Red Sox have morphed from penthouse to shithouse almost overnight. Seems not long ago we were basking in the glow of JBJ’s crazy catch off Aaron Judge and setting dates for the Yankees elimination party. Now we’re talking about Price and Eck and respect and how unlikable this team has become. I don’t buy into the unlikability — how can you not love a team with X, Benintendi and Mookie? — but it’s easy to see that something has gone terribly wrong in the Sox’ clubhouse. And unless it’s corrected soon, we’ve got another lost season on our hands.

Next post Finally, a Player from the Giants Helping the Red Sox Win Games

Previous post Can the Red Sox Recover to Win the East?