Another Yankees Closer Meltdown at Fenway 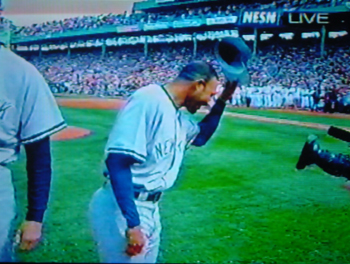 There was a time when the Yankees bringing in their closer to secure a win over the Red Sox was a done deal. Like, we almost didn’t even need to trot out there for those last three at bats. Just let everyone go home early and be done with it.

But 2004 changed that. Once mighty Mariano fell, there was no holding us back. This was certainly the vibe last night at Fenway, when the Yanks sent Aroldis Chapman out in the ninth to protect a 4-3 lead. But the man never even recorded an out during a bizarre half-frame.

Mookie got an infield single, followed by a Pedroia blurb and a X grounder that was flubbed by Ronald Torreyes, allowing Mook to score. Then came an intentional walk of Hanley, and a not-so-intentional walk of Benintendi to end the game. That led to one of the greatest hair-flip/dance move combos ever to be unleashed on the Fenway grass:

Sleep tight, Red Sox Nation. Benintendi's hair is watching out for us. pic.twitter.com/47AsgmPiMg

WATCH THIS ALL NIGHT pic.twitter.com/vOXuNkgJg6

This loss dropped the Yankees to third place, behind–holy shit–the Tampa Bay Rays. With Sale on the mound today, the Yanks might want to get comfy in the three hole.