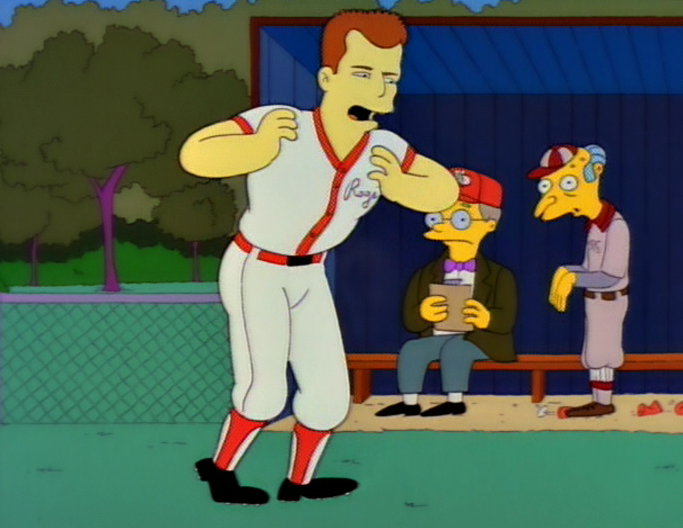 Literally the greatest work of art produced in the 20th century, Homer at the Bat was an instant television classic. This landmark Simpsons episode recently celebrated its 25th anniversary, and Cooperstown finally came to its senses, resulting in Homer Simpson named as a Hall-of-Famer. Ozzie Smith returned from the Springfield Mystery Spot, so the upcoming ceremony on May 27th will include the Wizard and Wade Boggs. Sportsbooks will be taking action on whether or not Homer will show up for his own induction, adding to the usual MLB picks and parlays that obsessive baseball fans enjoy.

Steeped in more than 116 years in history, the Red Sox are roughly as old as Mr. Burns. Hundreds have suited up for the Sox in Fenway Park, but only a select few are weird or famous enough to translate into a Simpsons character. If Homer at the Bat focused strictly on players from Boston Red Sox history, the Springfield Nuclear Power Plant softball team would consist of the following starting nine.

Carlton Fisk – Catcher
Nuclear Plant Position: Chief of Fun Police
Some referred to Carlton Fisk as the ultimate professional, while his opponents referred to his competitive spirit as psychopathic. As hard-nosed as a baseball pro gets, Mr. Fisk absorbed some of the hardest home plate hits that a catcher could reasonably expect to receive. He popped back up to his feet every time, throwing fists and choking multiple generations of Yankees players, most of whom couldn’t believe the amount of old man strength contained in Pudge’s body. He’s probably the only player to yell at an opponent to play harder, as “Neon” Deion Sanders witnessed when he didn’t bother to run out a pop-up. The word “neon” probably bothered Carlton.

Ted Williams – Outfield
Nuclear Plant Position: Who are you to tell Ted what to do?
The greatest hitter to ever live without steroids, Ted Williams probably would’ve held all the records if he didn’t serve in the Navy and the Marines in World War II and the Korean War. Unthinkable in today’s celebrity-obsessed society, he was pulled off the field in 1952 as an inactive reservist to rejoin the Marines as an aviator. This wasn’t enough for Boston sports fans back in the day, who booed this American hero mercilessly for on-field gaffes, reflecting their own inadequacy and insecurities as a group of not-Ted Williamses. Currently frozen in cryostasis, when you type “is Ted Williams” into the Google query bar, the first search suggestion reads, “is Ted Williams alive.”

Jim Rice – Outfield
Nuclear Plant Position: Sector 7-G Strongman
Eight-time all-star, two-time Silver Slugger, three-time homer leader, two-time RBI leader and AL MVP, Jim Rice was voted into the hall-of-fame because he broke his bat on a check swing. His legendary Popeye arms drove pitchers nuts, because he would occasionally hit a double off his forearms instead of accepting a single free base on a HBP. As impressive as other Red Sox sluggers have been through the history of the franchise, he was the only player in MLB history to notch more than 39 homers and 200 hits for three straight years. Jim Rice is probably the best human being on this list, rushing into the stands to save a young fan hit by a frozen rope in 1982 while everyone else gawked. He was also a home run machine in the original R.B.I. Baseball for the Nintendo Entertainment System.

Pedro Martinez – Second Base?
Nuclear Plant Position: Head of Senior Security
After being stuck with the Montreal Expos along with Vladimir Guerrero for a couple of years, Pedro Martinez escaped Canada to become the definitive ace for the Boston Red Sox. Unlike Roger Clemens, who needed steroids to combat the steroid use of batters, there was simply no way Pedro was hopped up on the strength juice, simply because he was lithe for a fireballer. Also unlike Clemens, he won his World Series with the Red Sox instead of pitching for the evil empire. Pedro was also pretty good at hurling septuagenarians and probably didn’t play second base.

Wade Boggs – Third Base
Nuclear Plant Position: Barney-Guarding Job
Perhaps the finest moustache to field third base for the Red Sox, Wade Boggs is another one of those hall-of-famers who squandered a decade with Boston. Eventually, he came to his senses and joined the evil empire to collect a World Series ring, paving a path for Roger Clemens to follow. Unlike Roger Clemens, who was cleared of lying to United States Congress, Boggs avoided becoming a chicken in his “Homer at the Bat” appearance, earning respect among non-gallus gallus domesticus fans. Despite Wade’s excellence as a hitter, fans of R.B.I. Baseball often subbed in Dave Henderson, Tim Burks or Tony Armas because hitting homers in video games is more fun than smacking singles.

Babe Ruth – Outfield
Nuclear Plant Position: Cafeteria Supervisor
Sold for $100,000 cash and a $350,000 loan, which was the style at the time, George Herman Ruth inspired one of the greatest hexes in professional sports history. The Curse of the Bambino set the tone for 86 years of abject suffering, destroying the hopes and dreams for lost eras of Boston Red Sox fans. He may have also inspired the Baby Ruth chocolate bar. One of the most incredible stats in all of baseball is the fact that he was inducted into the hall of fame with only 95.1 percent of the votes. Nine individuals out of 226 didn’t consider Babe Ruth to be hall-of-fame material, which proves that the Russian judge phenomenon has been around for longer than most people realize.

David Ortiz – Shortstop
Nuclear Plant Position: Power Plant Morning Show DJ
“Big Papi” was one of the finest clutch hitters in baseball, helping unclench the collective sphincter of long-suffering Boston baseball fans. In less graphic terms, his ability to focus when it mattered most helped break the Curse of the Bambino. He joined the Red Sox in 2003 after the Twins acted like the cursed Red Sox and gave him up to Boston for nothing. Seriously: his “replacement” didn’t even play a game in the Big Show. A few million dingers and three World Series later, Ortiz ended up becoming the most beloved batter in Boston and the Dominican Republic. Probably a terrible shortstop, fans should applaud Terry Francona for allowing him to become the best designated swatter in history.

Bill Lee – Pitcher
Nuclear Plant Position: Aerodynamics Cooling Tower Specialist
A former Catholic, now adhering to the principles of Rastafarianism, Bill “Spaceman” Lee earned his nickname honestly. He couldn’t even do weird pitches in a normal fashion, preferring his variant of the eephus pitch, known as the Leephus pitch. Spaceman didn’t care what anyone thought, which lead to passionate discourse about everything from Mao to marijuana, endearing him to Boston sports fans. A master junkballer, Lee somehow managed to piss batters off so badly that they couldn’t hit his pitches for a few years, earning him an all-star nod in 1973. Don’t worry – he wasn’t a pure commie. Somehow, despite his unadulterated weirdness, Spaceman served his Army reserve time as the final Red Sox member to miss time because of military duty.