Every Rankin/Bass Christmas Special, as Ranked By a Functioning Alcoholic 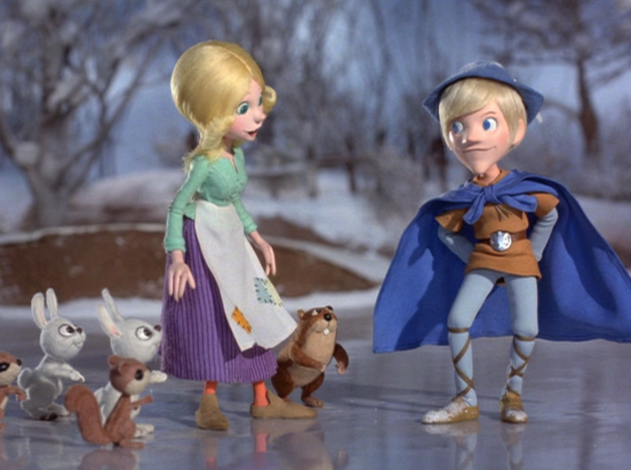 Besides knocking down a tree and dragging it into your house and “seasonal” rates from the local escorts, the best part of Christmas is the annual airing of the Rankin/Bass specials. Those stop-motion visits from Rudolph and Heat Miser seemed to make the holidays a bit brighter, and helped me forget that on my father’s farm wages, our Christmas dinner consisted of beets and rope.

That said, I come from a time before YouTube and DVRs and 37 different types of Oreos where we had to wait until the networks felt like airing these specials to enjoy them. Today, you can have them beamed directly to your frontal lobe. But that doesn’t mean you should have to waste time with sup-bar Christmas puppetry. So now, as a public service to all six of our readers, here’s an SG-approved ranking of all 18 classic Rankin Bass Christmas specials, in order of excellence.

18. The Stingiest Man in Town: I’ll come right out and admit that of all the RB specials, this is the one I’ve never seen. But I’ll assume by the title (and the fact that it stars the voice of Tom Bosley) that it involves some cheap asshole who learns to be less of an asshole after being scared senseless by ghosts.

17. The Cricket on the Hearth: “I’ve got an idea for our next special. We’ll get Roddy McDowell to be talking cricket, and–” *gets punched in the nuts*

14. The Leprechaun’s Christmas Gold: You know the good folks at Rankin-Bass were running low on ideas when they came up with this one. Not a single Irish stereotype is untouched — everyone’s pale, red-headed and sings like Tommy Makem. We can only assume they’ve got drinking problems and small peckers as well. If they put this in theatres on St. Patrick’s Day, they’d have a “Rocky Horror”-type cult thing, guaranteed. Grab a Guinness and watch it yourself.

13. Pinocchio’s Christmas: This one has all the hallmarks of the “lesser know and pretty shitty” RB specials: a talking cricket, a kid in trouble and forgettable songs. That said, there is a pretty neat gag in which a fox and cat trick Pinocchio into burying a sack of coins so he can grow a money tree — a scam I’ve been pulling at the local YMCA for decades.

12. Rudolph and Frosty’s Christmas in July: One of my biggest gripes about the Rankin/Bass specials is that while Santa and Rudolph got the full stop-motion puppet treatment, Frosty was relegated to ghetto animation. This is the only special in which Frosty is seen in glorious stop-motion format, but the story itself, which involves a travelling circus and someone trying to melt Frosty and his family (which is pretty much all you can threaten the guy with when you think about it) — and, on top of this, runs a staggering two hours — is a fucking mess. Also, in the spirit of Sam Raimi’s “Spider-Man 3,” this film features approximately 37 villains.

11. The Story of the First Christmas Snow: If you haven’t already noticed, I’m not a big fan of the RB specials that don’t at least somehow into the holy trinity of Santa, Frosty and Rudolph. But this one, which tells the very simple and uplifting story of a blind kid who learns about the holiday from a kindly nun (!), is pretty damn good. Of course, it’s typically aired around 3:00am on Christmas Eve, which shows you how much networks like “simple and uplifting.” You can watch the whole damn thing here.

10. Nestor, The Long-Eared Christmas Donkey: One of the most astonishingly misguided specials in the R/B canon. What was obviously conceived as a spiritually enlightening tale, explaining the birth of Jesus through the eyes of a clay donkey, comes across as 30 disturbingly depressing minutes. Before the first commercial break, Nestor is humiliated, spat on, beaten by his owner and loses his mom. By the time Joseph and Mary show up for the happy ending, most kids will need therapy or top addiction support.

9. The Life and Adventures of Santa Claus: An adaptation of the L. Frank Baum book that imagines Santa as an orphan raised by wood nymphs and fairies — just like Craig Grebeck. In a half-assed attempt to keep pace with the “darker” animated fare of the mid-80s, this one’s got creepy villains that look like a sort of Transformers-Gargoyles hybrid, a full-on axe battle, and a scream-inducing scene in which Santa is held captive by a snake and giant spider. Not to mention the entire theme of the special is “should Santa Claus die?” Merry fuckin’ Christmas, kids! (Also: watch it here.)

8 & 7. Frosty the Snowman and Frosty’s Winter Wonderland: I’ll admit to being a bit prejudiced against the Frosty specials because, unlike most other R/B fare, these ones are animated instead of being rendered in that cool stop-motion format. The saving grace is that these specials feature cartoon versions of Jimmy Durante and Andy Griffith, respectively. Oh and did you know that Jackie Vernon, who voiced Frosty, was a comedian whose material was often just on the edge of “adult humor”? Bonus points.

6. Rudolph the Red-Nosed Reindeer: This one’s considered the Holy Grail of the R/B specials: mythical and untouchable. And for most folks, it’s their first and most fondly-remembered exposure to Rankin/Bass. But I’ve always found it cloying and unabashedly mean-spirited, with a message that is basically, “it’s okay to make fun of people who are different until you need them to save your ass.” I give a pass to Burl Ives’ snowman and Herbie the dentist, who are probably two of the most endearing characters to come out of these specials, but, though it may seem blasphemous, I actually prefer…

5. Rudolph’s Shiny New Year: Full disclosure: as a child, I hated seeing this one pop up on network TV, because it invariably signaled the end of Christmas vacation. If, like Young Red, you shunned this one on that principle alone, give it a second chance. Here, as in Rudolph, the story centers around a character who looks different — in this case, it’s Baby New Year, who’s got massive ears that, of course, invite ridicule. But everything about this one–from the songs to the sidekicks–is superior. Okay, maybe a slight edge goes to Burl Ives’ snowman narrator over Red Skelton’s Father Time, but I’ll take Big Ben the Whale and Sir 1023 over Yukon Cornelius and Herbie any day. Watch it here and tell me I’m not wrong.

4. The Year Without a Santa Claus: Santa says, “fuck it.” Heat Miser and Snow Miser show up. Mrs. Claus saves the day. A classic. If you need to know how times have changed since this one first aired, check there scene where a mother finds her son chatting up a strange old man and her first reaction is, “bring him inside.” (Which you can find here at the 18:41 mark.)

3. Twas the Night Before Christmas: Affectionately remembered as “the one with the mouse who fucks up the clock,” this one reminds us, in just 22 minutes, the simple power of believing. If you don’t get all choked up when you hear the song “Even a Miracle Needs a Hand,” then you’re an android. Watch it here.

1. Jack Frost: I take a lot of heat for loving this one so much; in fact, one of my siblings still refuses to talk to me for preferring it to every other Christmas special out there. But Jack Frost struck a chord with me when I first saw it as a young shaver, and I haven’t been able to quit it since. For one thing, it’s the perfect treatise of unrequited love: Jack Frost gives up immortality for the chance to woo a young village girl he’s crushing on, only to have her dump him for a literal knight in shining armor, thus realizing what the rest of us already know — being a mortal sucks ass. For another, it’s got, hands down, the most surreal antagonist in the entire RB canon: Kubla Krauss, a villainous cossack who rides a robot horse and confides in a ventriloquist dummy… of himself. Lastly, it features the most poignant musical moment in probably any film ever, as a poverty-stricken family passes an empty, gift-wrapped box around the dinner table, imagining “It’s Just What I Always Wanted.” Don’t fight me on this, it’s genius. And the best of the Rankin/Bass specials.

Next post Merry Christmas, Phillies, You're Getting Clay Buchholz