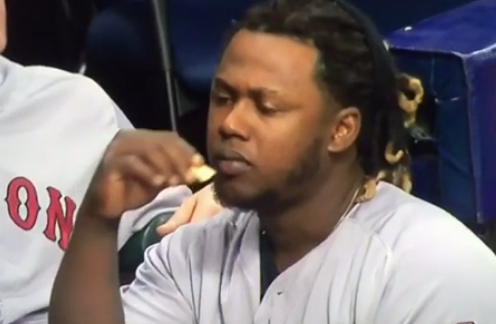 I’m just your basic, red-blooded, borderline alcoholic American male who happens to love watching the Red Sox beat up on the Yankees. So before this latest Sox-Yankees series started, when I said that I’d be fine with the Red Sox crushing the Yankees’ playoff aspirations over the course of four games, leaving them 8 games out of first with just a couple weeks left, it was partly tongue and cheek but mostly wishful thinking. Now, after the Sox took their second straight game from New York, we’re halfway there, and that wishful thinking has become full-on blood lust. I want the series. I want the sweep.

So, it seems, does Hanley Ramirez. Last night, the man was once again was the catalyst in a thumping of the Yanks, going 2-for-3 and driving another home run to the center field bleachers.

More importantly (or perhaps more surprisingly), Clay Buchholz held it together for yet another start, getting the win and looking somewhat non-awful for 6 innings.

But this was all just table setting for what turned out to be one of the most epic post-win outfield dance celebrations of the season. Not only did we get Jackie on the ski jump again, we had a side-stage performance from Mookie, performing what looks like 50 percent Irish step, 50 percent vintage b-boy moves, 100 percent totally fucking awesome.:

I have no idea where this train is heading. Inconsistent as they seem at times, this team’s got some pretty slick buzz and energy about it. Is it as potent as what we saw in 04 or 13? The next couple weeks will tell, but it’s been interesting to watch the Sox become baseball’s equivalent of the Hydra from Greek mythology, in that every time a head seemingly gets cut off, it grows right back. To illustrate: Xander and Mookie were carrying the offense for much of the early summer; now that the two of them have cooled down, Pedroia and Hanley have picked up the slack. Another example: the first part of the season saw Steven Wright make the All Star team and David Price look alarmingly like a big-budget bust. Now, with Wright down (thanks again, John Farrell), Price has looked much more like the stud we hoped we’d be getting, filling the void and fueling this late-season push to the finish line. The guys always seem to pick each other up at the right time and that’s a good omen.

This team isn’t perfect, but it doesn’t need to be. Just get to the playoffs and see where the chips fall. In the meantime, I’m happy to sit back and watch Hanley Ramirez tear up the Yankees’ ticket to the postseason.

Next post The Boston Red Sox: Crushing Yankee Dreams Since 2004