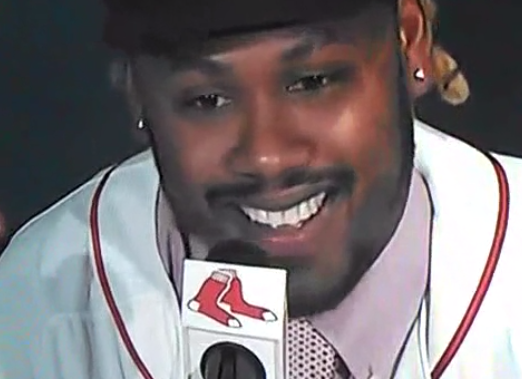 Everyone loves a good old fashioned serving of karma with their baseball. Especially Red Sox fans. So it made for great entertainment tonight when Hanley Ramirez got some pretty solid revenge on Giants pitcher Albert Suarez.

It all started when Suarez plunked Hanley in the fourth inning of an 8-5 game which at one point saw the Sox leading 8-0. Now, we’ll give Suarez the benefit of the doubt and assume the plunking had nothing to do with the fact that HanRam had already hit two home runs off Giants pitching over the first few innings. As Hanley strolled down to first base, he seemed to say something to Suarez, which Jerry Remy interpreted for the viewing audience.

When Hanley and Suarez met again in the seventh, the score now 8-7, Hanley made good on his promise, nailing his career-high third home run of the night.

It was a performance that won approval from the Fenway crowd and, more importantly, David Ortiz.

It marked a banner night for Hanley, who drove in 6 runs as the Sox took down San Fran, 11-7. But props must go to Matt Barnes, who entered the game with the score 8-7, bases loaded and nobody out, and somehow managed to shut the Giants down without allowing a run. It was a massive performance on a night that seemed to be spiraling early on when newly acquired Drew Pomeranz fumbled after just three innings having given up 8 hits, 2 home runs and 5 runs in total. In fact, this was the kind of game we would have lost in June. But July seems to be a very different sort of beast.

So the night ended with the Sox taking sole possession of first place, and Hanley getting the world’s most polite Gatorade bath. Mission accomplished.

Next post Unacceptable: The Red Sox Lose to the Second Worst Team in Baseball 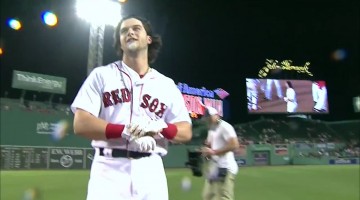