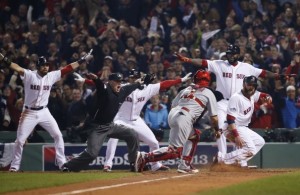 Disclaimer: I am not saying the Red Sox are a lock to win the World Series in 2016, so save your venom.

Remember when the 2013 season started? Red Sox fans were reeling from the historic collapse of 2011 followed by the Valentine Massacre. So, when the Sox started hot (18-8 in April) to open the 2013 campaign…let’s just say most people weren’t convinced they were for real. Some people, one named Denton, didn’t get on board until the final out of the World Series.

Fast-forward to 2016. Red Sox fans are reeling from back-to-back last place finishes. So, when the team starts out hot (14-8 in April)…should we be on board?

I’m a glass-half-empty kind of guy (unless it’s a cold glass of chocolate milk, then it’s completely empty) and I just can’t picture this season ending with a championship. And here’s why…

The good news is, I don’t see this team imploding and finishing last…again. The bad news is I don’t see them making a deep playoff run if they even make the playoffs.

Previous post Rusney Castillo is the Future of the Red Sox, According to this Garbage Can