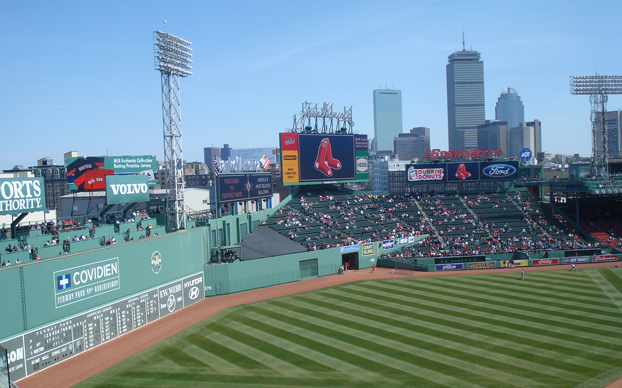 On my way in to the game today, so I will shamelessly re-post this entry from a couple years back. Because it all still matters.

My Dad’s been gone for almost seven years now. And Christ knows that in that stretch, there’ve been more than a few times that I needed his advice, his insight, and his mannered reassurance that no matter how hopelessly bizarre my life got, everything would pull together nicely in the end.

But there’s no day I miss him more than Fenway Opening Day.

Because to him, that day was the greatest of days. The KING OF DAYS. It was as if Christmas and your birthday got together and had a kid. It was never-ending summer and a lifetime of promise and free hot dogs and new bikes for everyone crammed into the few short hours the game was on. Sure, there was “opening day.” But unless it happened at Fenway, it almost didn’t count.

Fenway Opening Day was more than just the “true” start of the season. It was an unofficial holy day of obligation. And we treated it as such.

Used to be we’d go to the games, and I’ve no doubt my refusal to ever pay to park pushed the man a little closer to his deathbed. When tickets got too pricey and he got too ill, we’d watch the games at his place. And there’d be grilled burgers and donuts and popcorn and soda and ice cream and whatever the hell else we could get our mitts on because this was the day you said “f$%k all” to diets and health and common sense. The Red Sox were back, goddam it, and we were gonna do whatever the hell we wanted.

The last coherent conversation I had with my father was in a dimly-lit hospital room watching a NESN replay of the infamous “bloody sock” game. It was the most animated I’d seen him in months. Maybe years.

“Let’s just leave,” I suggested, only half-joking. “Let’s go down the street to the Cask and watch the rest of the replay on the big screen.”

He just laughed. “We’ll do that next Opening Day.”

He was gone in a week. And I’ve replayed that “Opening Day That Never Was” in my head a million times.

So as much as I miss Dad today, it’s probably the one day that I can still hear his voice the clearest. Shouting (politely) at the TV, cheering on the home team, telling me that if I have more than two beers he’s taking my car keys.

And here’s to Fenway Opening Day.

(For full effect, listen to the clip of Andy Williams and replace “time” with “day” in the chorus.)

Next post Time To Say Goodbye To John Farrell