Mookie Betts and Rich Hill Save the Day, September, and Possibly the Season 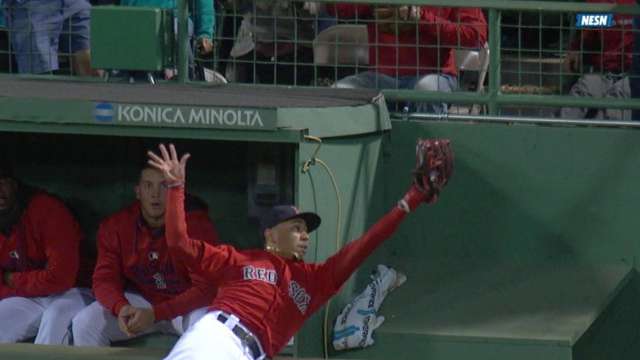 Okay, that may be a bit of an exaggeration. This season was pretty much a lost cause way back in June. But last night, the Red Sox gave us another magic moment in a year of meager returns.

First off, we had Rich “Who?” Hill turning in a pristine, two hit complete game — the third straight game in which he’s struck out 10 or more batters.

After that, we had the final out of the game, a magnificent, over-the-wall robbing of a home run by Mookie Betts.

Amazing, right? It’s a catch so good, it should count for a defensive out in the 2016 season. Even the Bullpen Cop knows what’s good:

We also had what I can only describe as the closest I’ve ever seen two guys sliding across the plate in my decades of baseball watching, starring Xander and Pedroia.

It was a cornucopia of highlight reel footage on a cold night in September with our team essentially relegated to last place. And all I could say afterward was

Next post Can Someone Please Get Xander Bogaerts His Gatorade?