Through the years, I’ve made a lot of jokes about putting my fist through a wall during a Red Sox game. Fact is, dear readers, I’ve only really done it once. On the evening of August 29, 2000. When Pedro Martinez lost a no-hitter in the ninth inning of a game against the Devil Rays.

Back then, on that fateful night, some of you may have been in diapers. Maybe one or two not even born. Some of you were working or sleeping or prepping for college or enjoying the last vestiges of summer vacation rolling on a towel with your lover on the beach.

But I was a grown-ass man putting his grown-ass fist through a wall I’d paid for. Over Pedro Martinez.

That’s the passion that the man inspired in me.

Today, where Wade Miley has inexplicably become our team’s best pitcher and we say things like, “If Porcello can hold them to 6 runs, we might have a chance,” it’s almost difficult to imagine that we once had a guy who had us believing he’d throw a perfect game every time he took the hill. But we did.

That was Pedro Martinez. The greatest Red Sox pitcher of my lifetime.

I lived through Clemens, mind you. And I can’t deny the power of his games. I still recall fumbling with my school work while listening to the Rocket mow down twenty Mariners in one game back in 1986. But most of my memories of Clemens are tainted by some epic, early ’90s playoff meltdowns (“I know where you live, Terry Cooney!”) and, of course, that going to the Yankees bullshit.

Pedro, on the other hand? It seemed like all of his starts, from the moment he joined us to the minute he left, were holy days of obligation. At my parents’ house, we arranged the chairs to resemble bleacher seats, waved Dominican flags, printed K cards and worked the eye black. We were young and trophy starved and couldn’t get enough of him. His mastery was so immense, so otherworldly, you were transfixed by it.

Beyond the talent, the guy had two other things that made him a legend in this town: balls and a playful, almost childlike personality. The swagger. The head pointing. The drama queen antics. The Yoda mask. The dance moves. The dugout cheerleading. The jheri curls. “Wake up the Bambino and maybe I’ll drill him in the ass.” He had a heart as big as your Aunt Selma and a body that seemed vulnerable to the slightest breeze. Hell, the guy was so persuasive, he somehow sold Red Sox ownership the ultimate monorail — putting his brother Ramon in the starting rotation.

But when he got on that mound, man, all he was missing was the cape. And some nights, he even had that.

His rules were simple. The inside of the plate is mine. Thou shalt plunk my teammates at your own risk. The ball you hit over the wall this inning could be the ball that gets wedged up your south 40 next inning. So think about it, punk.

My two favorite Pedro moments provide splendid bookends to his remarkable tenure in Boston. The first is in 1999, when he reversed the tide of the ALDS, coming in against a Cleveland team that was beating the tar out of the ball and rendering them completely inoperative. In those days, the salad days, he was the angel of death. And on that October night, with a packed house in Cleveland going apeshit and tasting Red Sox blood, the bullpen door swung open, a slight figure ambled out of it, and an eerie silence descended. Because Pedro was coming into the game. And that was like flipping a switch. Over and out. More on this game later.

The other came during game five of the 2004 ALCS, when Petey came up and in on Hideki Matsui, knocking him on his ass and effectively taking his bat — which to that point had become Thor’s Hammer — out of the series.

And now, today, he’s being inducted into Baseball’s Hall of Fame. His immortality is guaranteed in Cooperstown’s hallowed halls. But in my mind — and in the mind of anyone who grew up watching Pedro work his magic — it was already assured.

With that, here’s the obligatory list (lust?) of my personal favorite Pedro moments:

5. Crushing in the Bronx: Pedro versus Rocket? Hell yeah, we’ll take a double dose of that shit. And the best of those mash-ups was at Yankee Stadium on May 28, 2000. Both starters went a grueling, ball-blistering nine innings. Pedro gave up just four hits while Roger gave up five. One of those, unfortunately for him, was a ninth-inning, two-run jack by Trot Nixon, whose greasy mug, I’m fairly certain, still haunts Roger to this day.

4. The Near No-No: As has been well-documented, Pedro was never afraid to go up and in on an opposing batter. And during an August 2000 game against the Devil Rays, he plunked lead-off batter Gerald Williams on the hand, inciting a brawl for the ages. Petey really didn’t acquit himself well in the donnybrook — he looks kinda like a rag doll swatting at flies — but Jason Varitek reaffirmed his value to the team with a magnificent take-down, protecting his pitcher and, at the time, the Sox’ most valuable asset.

What the Rays didn’t know was that you can’t kill Pedro, you can only piss him off. And for the balance of the game, he tore into them mercilessly, carrying a no-hitter into the ninth. The no-no was broken up, tragically might I add, by former Sox catcher John Flaherty. As previously noted, I was so pissed, I put my fist through a wall. I then finished my beer and walked straight out the door, spending the next hour wandering aimlessly through the neighborhood, working off my aggression by shouting at trees and squirrels.

3. Size Matters Not: Screw the Summer of George. 1999 was the Summer of Pedro. Watching Martinez tie up batters in fits and play Superman to Clemens’ Lex Luthor helped take the sting and sweat out of the humid July air better than a busload of Coors Light. And smack dab at its center was his electrifying performance in the 1999 All Star Game at Fenway Park.

All of a sudden, the world was in his house, and he responded by striking out the first four batters he faced–including noted protein shake-quaffers Mark McGwire and Sammy Sosa–and serving notice that with him at the reins, the Sox would be a force to be reckoned with down the stretch. McGwire and Sosa in particular look like they’d have better luck tying a knot in a stream of piss than catching up to Pedey’s fastball.

This was probably the last All-Star Game I watched from start to finish. And after seeing Pedro work his magic, there never really was another reason in my mind to ever tune in to another. Nothing would top the unstoppable awesomeness of the World’s Skinniest Jedi doing our park and our city proud.

If we’d only had a few more horses of his calibre on the team, we might have been able to overtake New York in the ALCS just a few months later. Nonetheless, his performance on the mound that night was one for the ages.

2. Tossing Zim: Okay, there’s nothing funny about an old dude getting dropped on his ass. But watching Zimmer make like a rhino and hurl his aged, doughy body at Pedro during the 2003 ALCS stands as the single most surreal baseball moment of my lifetime. Closely followed by Craig Grebeck’s career.

1. Stomping the Injuns: Game five of the 1999 ALDS was a game we had absolutely no business winning. I mean, what kind of a deal do you have to make with the devil to see Troy O’Leary follow two Nomar intentional walks with a grand slam and a three-run homer? Over the first three innings, this one was absolutely exhilarating and mind-bogglingly hilarious as an astonishing fifteen runs were plated. It was set to be a bash-fest for the ages, until the bullpen doors swung open and Pedey’s fragile frame ambled to the mound, immediately silencing the crowd. Before Pedro, Cleveland had eight runs on seven hits off D-Lowe and Bret Saberhagen. After Pedro, they pulled an O-fer for the final six innings. Pound for pound, it may have been his greatest performance in a Red Sox uniform.

Next post Episode 5,972, In Which I Get Oddly Sentimental Over Shane Victorino Leaving the Red Sox

Previous post The Red Sox Don't Win Often. But When They Do, It Is Spectacular. 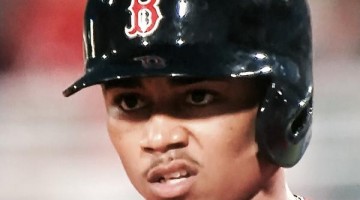 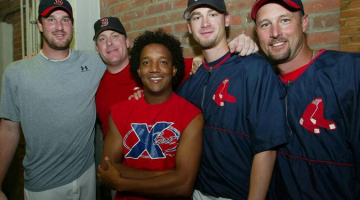