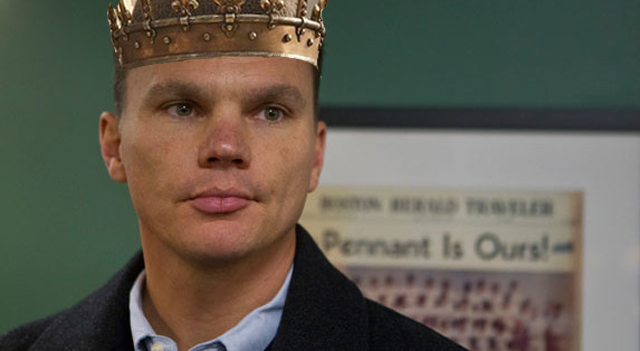 MacBen: Who’s there? What, ho!

Lady MacBen: Alack, I am afraid they have awakened.

MacBen: Then they are on to us! And the murder!

Lady MacBen: No, far worse. It is the team’s performance that hath spurred their anger. Specifically, your loyalty to Sir Farrell.

MacBen: Serious? Did you remind them we just won a World series two years ago with Sir Farrell at the helm?

Lady MacBen: Still their anger runs deep. No water will clear us of this deed. They are coming for blood.

MacBen: Let me talk to them. I’m sure they’ll listen to reason.

[MacBen walks to the castle window, looking down at the angry mob below. Heading the mob is Macduff.]

Macduff: There he is! The one who brought the Sandoval upon us!

MacBen: Guys, listen. There’s still plenty of time for us to turn this around. It’s only July, and I’ve got nothing but faith in Sir Farrell. He’s our guy.

Macduff: Enough, you lily-liver’d scoundrel! And seriously — squandering JBJ with the Knights of Pawtucket while the vile Ramirez insults us in left? You deserve a fool’s death for that alone! Never mind the king’s ransom paid to Rusney of Castillo!

MacBen: Okay, bear with me here. While it’s easy to say Hanley Ramirez is a bad fit for left field, I prefer to think that left field itself may not be right for Hanley Ramirez. Let’s put the blame where it belongs, people.

MacBen: All I can tell you is right now, we’re committed to Hanley in left field and trying to help him be the best left fielder he can be.

[Sounds of a large wooden log being rammed against the castle doors.]

MacBen: This is one of the most soundly constructed teams in baseball. I honestly believe that we are capable of winning any night of the week. Although mostly on Thursdays.

MacBen: And I’m not sure how anyone can simply dismiss Joe Kelly after only a year’s worth of evidence. Just look at Rome. That shit took decades to build.

[Sound of angry mob heading up the stairs.]

MacBen: Why am I the only one who gets it? With transition comes a lower level of performance. We’re close to getting fully past those transitions and having a better sense of where everything is. Everything is awesome!

[Angry mob bursts into the room.]

MacBen: Hold your ground, motherfuckers. Unless your armor can handle this!

[Hurls a souvenir brick at Macduff’s chest. Brick tatters to dust and falls away.]

Macduff: THIS IS FOR PORCELLO! [Draws sword, lunges at MacBen, knocking him to the ground.]

MacBen: That I might die… never knowing The Large Father’s true age… [falls off stage.]

Malcolm: Well, that’s that. With MacBen dead and Sir Farrell lost on the Isle of Napoli, we can surrender the team to a better, perhaps wiser leader.

Macduff: All in good time. Right now, I want you to get a message to Lord Gardenhire.

Next post The Red Sox Don't Win Often. But When They Do, It Is Spectacular.