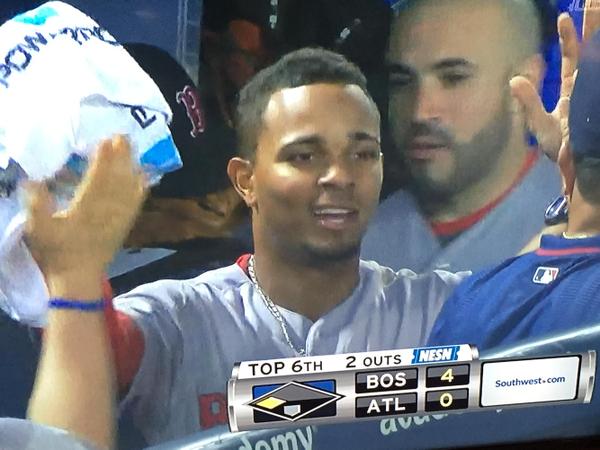 Look, at this point I’ll take any Red Sox wins, any way we can get them. Tonight’s, it just so happened, was a nice team effort. While Sandoval rode the pine, his co-workers came up big, with Clay going a pretty solid seven innings, Brock Holt continuing to roll in super-human mode, another timely hit from X, and Mookie continuing to return to early-season form. Even freakin’ Ale-who?-dro De Aza came up big when we needed him, getting two hits and driving in a run.

But for all this magic, no one seemed happier a the end of the game than Koji, who set down the side in the ninth, then had this bizarre exchange with Mike Napoli:

Just further proof that the Koji-Napoli Alliance has always been a curious, beautiful thing.

BONUS VINE: This slide by Holt, who motored all the way home from first, is a thing of beauty. But the way he jumps up and claps his hands approvingly after said slide? Magic.