Red Sox Determined to Prove they Can Lose Any Game, Any Time 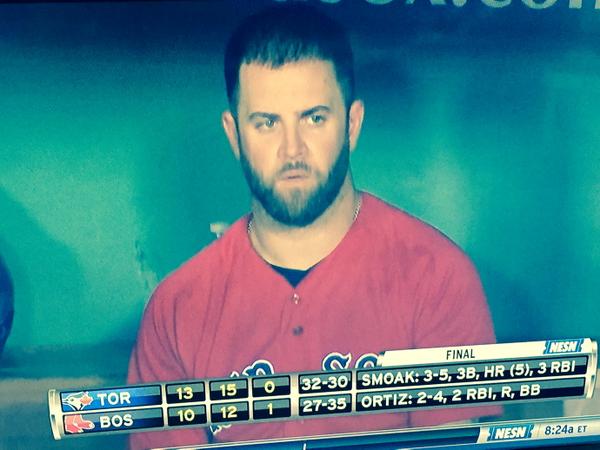 One thing we hadn’t seen, at least before last night, was a game in which the other team spotted the Red Sox a seven run lead, only to come back and crush whatever spirit remained in this corpse of a season.

Early in the game, Mookie Betts crashed horrifically into the centerfield fence, and eventually left the game with a low back strain. I thought said crash would be the ugliest thing I witnessed all night.

The tragic thing is, all the ingredients were there for a Red Sox win. They were back in Fenway, where they were last seen staging a rousing comeback win against the A’s. The Blue Jays were on an eight game win streak and, one might argue, ripe to finally drop one. And the Sox offense exploded for five runs in the first inning, seemingly playing like guys who were still smarting from the Baltimore sweep and determined to turn the ship around.

But then–and it’s tough to replay it because I still can’t wrap my arms around everything that went wrong–the Red Sox let it get away with a loss so glorious, so insanely inconceivable, that it immediately ranked among the greatest Red Sox fuck-ups of all time. Maybe top five. Ahead 8-4 going into the seventh, Matt Barnes, Junichi Tazawa and Tommy Layne gave up a staggering 8 hits and 9 runs in one inning, effectively torpedoing any positive mojo and goodwill left in the stands, possibly for the rest of the season.

By the time Mike Napoli stepped to the plate in the bottom of the eighth with the bases loaded, two out and representing the tying run, only the most hardened whiskey drinkers among us thought he’d make it happen. Even if he did, the seventh inning soured me on the long-term viability of this team.

Funny thing is, I’m not sure what can be done to make things better at this point. You can fire Farrell, but who steps in? You can trade the farm for a solid starter, but what does it gain you? At seven games out in early June, the team isn’t technically done by a long shot, but are they capable of going on a Blue Jays-esque 9-game tear?

Sadly, I don’t have any of the answers. But I do have a couple Red Bull & vodkas that need my attention. Good day.

Next post The Entire 2015 Red Sox Season, Neatly Captured in One Vine