Xander and the Red Sox Make the Last Splash 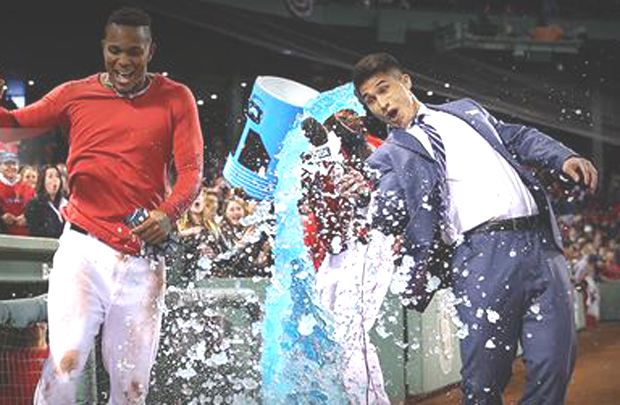 Here’s the most important takeaway from last night’s game: the Red Sox won on a walk-off single by their number eight hitter who is hitting .395.

Yes, Xander Bogaerts is having the year we thought he’d have last year, and he’s doing it in a way that works for him: out of the spotlight, buried in the line-up, unencumbered by the weight of expectations. While we slap Mookie posters on our walls and buy panda hats, X has batted around .400 through the first 10 games of the season and has the 6th most hits in the AL.

This Xander-Napoli tandem was the story of the night, because it was in the ninth, with the game tied 2-2, that Xander looped a single to shallow right and Nap, who was on second, got his Wally West on, turning on the jets and not stopping until he hurled his beer-drinkin’ frame across the plate.

Nap is a steam engine.

It was a strange night to be sure, with Ubaldo Jiménez throwing no-hit stuff into the fourth until he plunked Pablo Sandoval and got kicked out of the game. But I’ll take a win over the Orioles any way we can get it. Also: I don’t like to buy into hype too early (and I still have a case of unsold “Brad Penny, AL Cy Young” T-shirts in my garage to remind me never to do so again). But this 2015 Red Sox team has got me thinking that worst-to-first-to-worst-to-first is a thing that could actually happen.

And let us also consider that the Red Sox are in first place in the East, third best record in the league, and Napoli and Sandoval haven’t even started hitting yet.

Be afraid, other teams. Be very afraid.