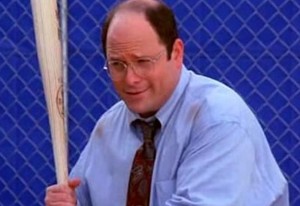 A long time ago, way before the Red Sox started winning championships…they really sucked. They would come out of the gate hot, but fade as the summer days grew shorter. Sometimes it was a June Swoon, sometimes it was the dog days of August, usually it was started with the once-deadly West Coast swing. It was expected, year after year, until “wait’ll next year” became the battle cry of Red Sox fans. It was even a bumper sticker, sponsored (maybe?) when the Sox were on Channel 38 in the pre-NESN days.

Anyway, times have changed (with the exception of 2011). The Red Sox aren’t always great, but they’re not a lock to fall apart at the end of the season. But when they start out slow, the familiar expression is “it’s still early.” And maybe being in first place at 7-5 isn’t really starting out slow, but do they really look like a first place team? It is still early, but when your starting pitching is as bad as what the Red Sox are putting out there, it gets late pretty quick.

The Sox have a chance at splitting the four games series with the Orioles. If not for an overzealous second-year umpire on Friday, they might be playing to avoid a sweep. Yesterday was another woeful day on the mound, this time it was Porcello’s turn to get rocked for 8 runs. Now four of the five starters have ERAs over six. The exception is Joe Kelly, and you can find him on the DL.

The good news is that the Sox have the bats to overcome a lot of ugly pitching. It will make for some interesting regular season games, but if they don’t get some help, it’s not going to be early for long.