The Importance of Being (and Keeping) Mookie Betts 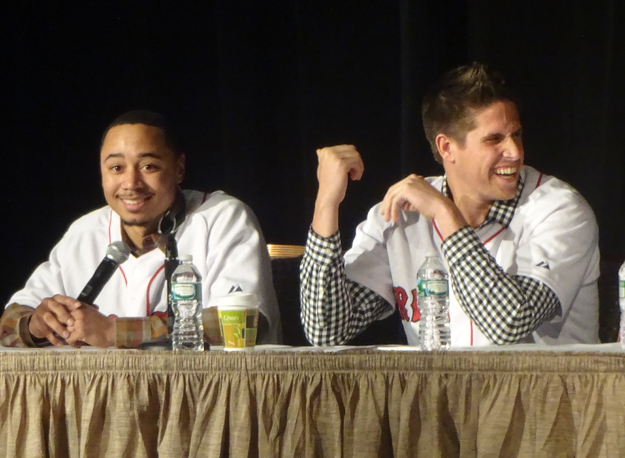 photo by yours truly at Red Sox Winter Weekend

Much of my winter was spent shoveling snow, drinking myself comatose and waiting for the seemingly inevitable news that the Red Sox were trading Mookie Betts away for a starting pitcher.

Now winter’s almost over, the days are getting longer, and Mookie’s still with the team. So, for now, I’ll breathe easy.

I’ve feared the loss of Mookie since last September, when his late-season call-up seemed a showcase for an interested buyer. And it has as much to do with David Ortiz as it does with Mookie.

Allow me to explain.

Try as we may to ignore it, there’s an 800 pound gorilla casting a long, tired shadow across Fenway’s green. I’m talking, of course, about the ever-approaching final act of the baseball career of David Ortiz.

Yes, when The Large Father trades his bat for a comfy enterna-lounger, he’ll leave a sizable gap in the line-up, erasing the one bat we could rely on to bail us our of practically any unsavory situation. Without that bat, the 2004 and 2013 World Series victories never happen. And we’re all feeling a little bit colder as October rolls round.

But there’s a bigger problem at hand. Ortiz is more than The Greatest Clutch Hitter in Red Sox History, he’s the goddam Face of the Franchise. The guy whose smiling mug makes our troubles disappear. Stephen Drew getting a $10 million dollar check for two months of work? Civil unrest in Hong Kong? Ebola virus primed to wipe civilization back to the Stone Age? Who has time to worry about that shit when Ortiz is driving the Dunkin’ Donuts truck on our TVs?

Subtract Ortiz from the Red Sox equation, and life in the Nation is suddenly, horribly different. This, we can all agree. But there’s someone who’s already on the roster who could be Papi v2.

I know we’ve only seen a small sample size. But in little less than a year’s time, he’s morphed from “who’s that?” to “how can we live without him?” He can bat lead off. He gets on base. He steals bases. He even hits the long ball, which, as Tom Glavine and Greg Maddux once told us, chicks dig. In fact, the 16 he hit last year across AA, AAA and the majors gave him more than any Red Sox player not named Ortiz or Napoli.

But never mind the versatility. Part of what makes Mookie so watchable — and so endearing in an Ortiz-like sense — is the absolute joy with which he plays the game. He’s roughly the size of a sixth-grader and plays with the unabashed enthusiasm of one, whether he’s sheepishly watching a replay of himself on the video screen or chugging down the line, gold chain flapping in the breeze. Discovering that the kid is also a state bowling champion in his home state of Tennessee? That’s icing on the cake. 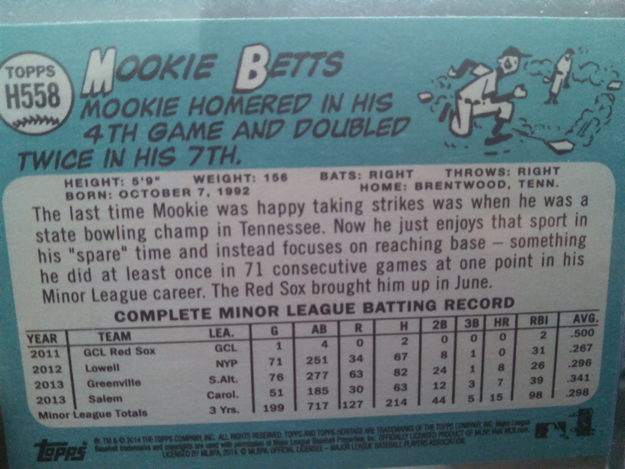 Plus, the kid does this:

Imagine feeling that good for the next twenty years.

In last year’s lost year, Mookie was a good thing. Maybe the best thing. Of all the players suited to fill Ortiz’s oversized shoes as Ambassador of Red Sox Goodwill, he’s the one I keep coming back to (and, yes, I’ve considered Pedroia, but I like the fact that The Elf maintains a bit of edgy standoffish-ness). Deep down, you may feel the same way, too. And the thought of shipping off a guy who could be the future face of our franchise for a pitcher who might be an ace for us in 2015 seemed a little short-sighted.

Now that he appears to be sticking around, I’m finally gonna sit back, relax, crack another beer (or two), and watch Mookiemania run wild in the streets of Boston.