The 2012 Red Sox Would Be On Track for the Playoffs Right Now. And If Your Aunt Had Balls She’d be Your Uncle. 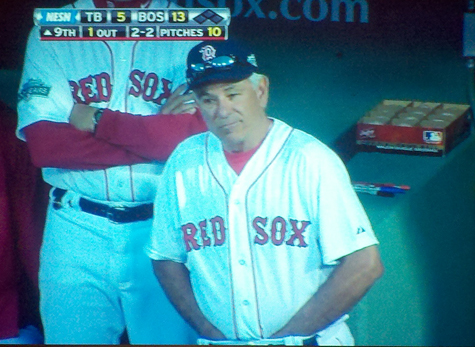 We don’t need to be reminded of how rancid that 2012 Red Sox team was BUT I NEED TO GO THERE AGAIN. Because I still can’t wrap my head around the idea that the 2014 team might end up BEING WORSE THAN THE 2012 EDITION. AND YOU’RE DAMN RIGHT I AM USING ALL CAPS BECAUSE THAT IS THE APPROPRIATE FORMAT FOR OUTRAGE AND BEER-FUELED BEFUDDLEMENT.

After last night’s wretched, embarrassing beat down at the hands of the 37-46 Cubs, the Sox are a mind-numbing 8.5 games out of the east, 9 games out of the wild card, and, perhaps most disturbing, 9 games below .500. All told, in their World Championship defense season, the Sox have spent one day above .500.

Does that even make sense?

All this means nothing more than, quite simply, Bobby V’s team, on this date in 2012, past the halfway mark of the season, had a better record than the 2014 does. Hell, if the 2012 team was competing in the ass-ugly 2014 AL East today, they’d be playoff contenders, a mere 2.5 games out of first!

Yeah, yeah, I know. And if your Aunt had balls, she’d be your Uncle. I guess what it all boils down to is that I am still utterly gobsmacked that the 2014 Red Sox have been such a grotesque failure. True, I never expected a 2013 World Series victory. But I did believe that 2012 would represent the low water mark of my lifetime. Coming into 2014, it was fair to anticipate a bit of drop-off from a lot of the key players as folks got older and the hangover of 2013’s relentless overachievement hit.

But a losing record for all but one day as we enter July? Right out of left field.

In fact, the more I seek solace in my 2013 World Series DVDs, the more preposterous it is to me that a team with Jonny Gomes, Shane Vic, Koji Uehara and a rejuvenated John Lackey could somehow muster fewer wins than a team with Carl Crawford, Josh Beckett and Nick Punto. But so far, tracking year-to-year comparisons, it has.

There’s still a lot of time for things to change. We’ve got another half a season to play. And, amazingly, the Red Sox could still be contenders in this woefully inadequate AL East. But as the Rays creep ever-closer and the division cellar beckons, I am forced to envision a world in which the team that earned a duck boat parade back in November (or, to be fair, 85% of that team) supplants Bobby V’s group as the worst of my lifetime.

And that just makes no sense to me.

Previous post Now The Baseball Gods Are Just Screwing With Us