Has it Really Been 10 Years Since That Varitek/A-Rod Brawl?

Am I really ten years older? I am. Also, I probably drink too much. 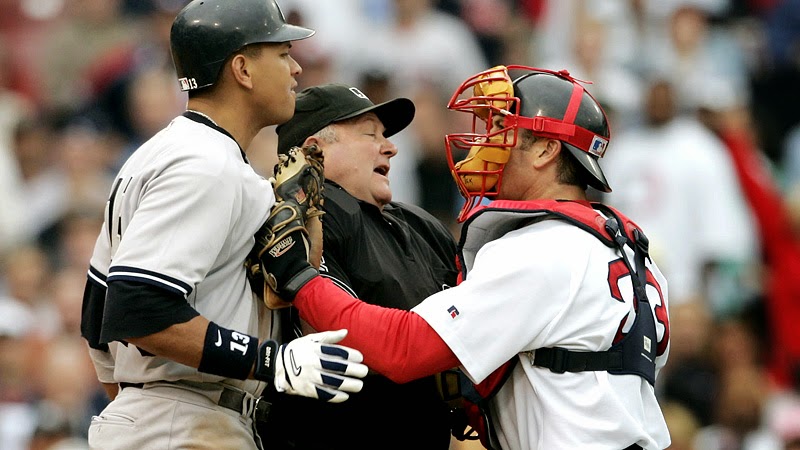 Tuesday night, after the Red Sox shit the bed in somewhat predictable fashion, leaving an unsettling number of runners in scoring position just 24 hours after scoring 14 runs, I calmly shut off my TV, emptied my last beer, checked my scraggy face in the mirror and said, “Ah, we’ll get ’em tomorrow.”

Then I had to catch myself.

Optimism? On the heels of a Red Sox loss? From a guy who cracked his hand punching a wall after Pedro lost his no-no to Tampa Bay in 99 and had to be sedated after Terry Cooney ejected Clemens in the 1990 ALCS?

Don’t get me wrong. I’ll still flip a chair with the best of ’em when the Sox can’t get their head out of their collective ass. But things are different now. And they have been, ever since 2004. Or, more specifically, ever since July 24, 2004. The day Tek and A-Rod re-enacted Spinal Tap’s “Smell the Glove” in front of 35,000 ravenous fans at Fenway Park.

Look, I came of age watching the 1986 Red Sox go down in flames against the New York Mets in the World Series. I still had years of heartbreak ahead of me, but this was the first time I felt the knife twist hot between my ribs.

Two years later, when we signed a solid closer in Lee Smith, I was among the masses at Fenway on Opening Day who watched Smith lumber out of the bullpen to standing O, then promptly surrender a game winning homer.

From there, I suffered the horrors of the ’90s and early ’00s Red Sox. Teams that routinely played second fiddle to the Yankees in the AL East. Teams that ran a 2-10 record in the four postseason appearances they made in the ’90s. Teams that brought us Danny Darwin and Dante Bichette while New York pulled the high-profile talent.

Then came 2003. The team that was perhaps best equipped to bring us to the promised land. We had Pedro. We had Manny. We had Damon. We had Nomaaaah. We had David Motherf$%king Ortiz. We had “Cowboy Up” and Kevin Millar’s hijinks and a sense of odd camaraderie that had been missing from previous teams. And when Grady Little drove that goddam team bus into the side of a volcano, I was convinced I’d never, ever see a Red Sox World Series win in my lifetime.

But it happened. Just one bloody year after that 2003 meltdown, it all came true. And the A-Rod/V-Tek dust up was the opening salvo.

Watching the brawl — which erupted after Rodriguez got plunked by Arroyo — I thought to myself, “Okay, THIS has got to get them fired up.” And it did. At least for an inning or two, where the Red Sox built a 4-3 lead. But then they slipped back into pre-fight mode: horrificly sloppy play, god-awful pitching (low-lighted by a brief stint by Leskanic in which I don’t think the guy threw a single pitch anywhere near the strike zone), and missed opportunities with the bases loaded. And before you know it, the Yanks are up 10-8.

But we kept! on! fighting! And when Mendoza was called upon to keep it close at 10-8, the guy delivered two hitless innings. And that set the stage for the game to end the way we’d always scripted it: with Mo Rivera giving up the walk-off, game-winning home run. Thank you, Bill Mueller!

Is this the spark? Will the Sox roll on from here to that much-wished-for 15-game win streak? Dude, this is baseball… and after today’s game, it’s safe to say anything can happen. But for one friggin’ spectacular afternoon, we got to see Mariano Rivera be the guy who watches helplessly as a pitch he’s just delivered sails beyond the bullpen wall. And it felt bloody good.

Turns out it was the spark. And just a few months later, the Sox finally vanquished the Yanks in the playoffs. And everything changed. All of a sudden, “no we can’t” became “yes we can.” Not that I expect them to win every time since the magic that was 2004. But that team showed us that sometimes, the impossible actually can happen. The fact that we’re sitting on three World series titles over the last decade — a concept that would have seemed downright insane if you proposed it to Red Sox fans twenty years ago — is testament to that.

We’ve led a pretty charmed sports life in these parts of late, between a buncha Superbowl wins, a Stanley Cup, an O’Brien trophy and, of course, three World Series titles. For the Red Sox, I like to think our fortunes changed the minute Tek’s glove met A-Rod’s face. And it’s a moment I’ll never forget.

Note: In any good baseball brawl, you have your “main brawl” and your “satellite brawls” that branch off from the primary donnybrook. The best one from this fight: Tanyon Sturtze grabbing Kapler from behind and then getting grabbed himself by the behemoth that is Ortiz. The three then go tumbling, only to have Trot Nixon join the fray. For all his clean play and loquacious interviews, we knew that there was a brawler lurking beneath Kapler’s skin (cripes, he’s pretty much the only guy on the team who isn’t built like your high school gym teacher). And it was awesome to see it unleashed. Kapler was particularly animated after he got ejected and Sturtze, remarkably, remained in the game.

Previous post A Plan for the Boston Red Sox