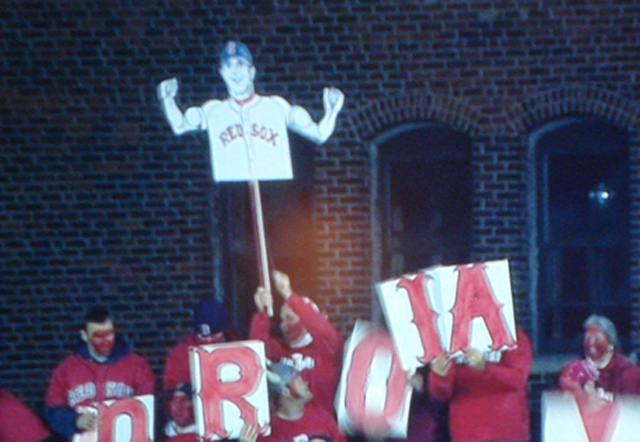 Look, guys, I’m not particularly happy about the way we’ve been playing. For a dead-ass last place team, we’ve got a lot of heart. And we’re still the world champs until someone wrestles the f$%king trophy out of our hands. But as some of these asshole tweeters keep pointing out, we’re on track to be a worse team than we were under Bobby V. And as the de facto captain of this team — not to mention the guy who has the most video footage of some of you drunkenly showering with Torey Lovullo after the World Series clincher — it’s up to me to shake things up.

I had a couple ideas for how to kickstart this team, most of them messy and expensive, and at least one involving Pierzynski being carried away by a pack of elks. But here’s an easy fix, one we can start right now.

You know that music we play in the clubhouse before a game to get us pumped up? Well it tends to be of two varieties: country or that crazy-ass rap shit Ortiz and his crew like. I’m suggesting we shake things up. And that we do it with the original glam rock band. Yes, that’s right, Kiss.

Before you all start moaning, let’s think about this. Imagine tying up your cleats to “Rock and Roll All Night.” Man, that’s gonna get the juices flowing in ways we’ve never experienced. And what about “Shout It Out Loud”? That’s just the kind of anthem we need to remind ourselves we’re still the reigning champs. Like we’re gonna SHOUT IT OUT LOUD to every team we face. You got me?

Alright, I’ll take your silence and this buck knife that was just thrown at me as a sign you’re not impressed. But there’s more to Kiss than those rock anthems. Remember their brief flirtation with disco in the 80s? You think any team’s gonna want to f$%k with us when we’re high on “I Was Made For Loving You”? Or what about “God of Thunder”? Ortiz can own that shit. I even smell a T-shirt slogan. And I’m betting you southern guys will appreciate the country stylings of “Hard Luck Woman.” Hell, it’s so country Garth Brooks did a cover of that song, and he’s on motherf$%king currency in Alabama, right, Peavs?

No one likes being in last place. But that makes us underdogs. And in the pantheon of rock music, are there better underdogs to emulate than Kiss? They made it into the Rock and Roll Hall of Fame for f$%k’s sake. Of course, we don’t need the leather outfits and facepaint — but if we decide to go that route, I’m totally calling dibs on the cat makeup.

That’s my case, guys. We sit back and let the AL East chew us up and spit us out, or we dig in our metaphorical six-inch platform heels and turn this ship around. I know which way I wanna roll.

Now if one of you wouldn’t mind giving me a lift to the top of the lockers where we keep the radio, I’ll be happy to slide in “Alive II.” And get this comeback party started.