Love and Beatdowns in the Air 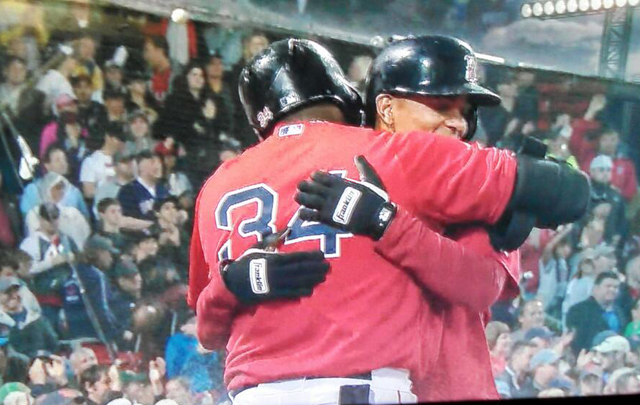 Last week, Justin Masterson, he of the greatest interview face ever, hung us out to dry in Cleveland. Last night at Fenway, we returned the favor, scoring five times in the first two innings and knocking him out of the game before most folks got their asses in their seats.

From there, the Sox crossed the plate five more times, making this a 10 run beatdown. Even better, it was an asskicking that pretty much everyone in the starting line-up contributed to, as all but Ortiz had at least one hit. (Ortiz, of course, gets what we call the “eterna-mulligan” so if he can’t make shit happen for one game, we’re fine with it.)

The most important takeaways:

Nava had another two hits, and with each Nava hit Grady Sizemore fades a bit more, like that family photo Marty McFly carried in his wallet. Myself, I’m just happy to see Nava get the chance to right himself; after his contributions last year it seemed he earned that chance.

Napoli also had two hits, and while I’m too lazy to look it up, I’m fairly certain he’s had at least one hit in each game since he’s been back. If not, it’s seemed like he has, and that’s just as good. Also, I’m drunk.

Bogaerts nailed a home run off the light tower in the eighth, snapping an 0-for-19 skid. The game was long in our back pocket by the time he hit it, but I hope it proves the spark that gets him back on track. Also, was anything cooler that Ortiz greeting him back at the dugout with a hug and some pats on the dome?

Look, we’re not gonna get 11 hits every game. We’re not gonna see such insane production up and down the line-up (especially any line-up featuring Drew and Sizemore). But tonight’s win was a big pump-up-your-spirits kind of win. It smelled a lot like those 2013 wins when everything was going our way and you just didn’t worry when the opposition put up a five spot. You knew the team was gonna make it happen one way or another.

Where we go from here is anybody’s guess. I’m just thankful that the Red Sox made things fun again last night. And that everybody helped make it happen.

Previous post Eight Games Back? Red Sox, We Can Do This.