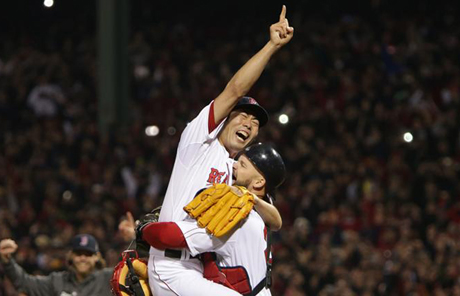 Gotta be honest: that was the most excited I’ve been for a Red Sox win since game six of the 2013 World Series. And what’s not to love? Everyone in the starting line-up had at least one hit (except the pitcher, of course, but come on). Pedroia, Sizemore and Bradley had multi-hit games. Jon Lester might not have looked his sharpest but kept us in the game through six innings. The bullpen limited the Braves to two hits through three innings. I drank shit tons of beer and clapped.

Most importantly, the Sox got the hits when they needed the hits. In the seventh, down by a run, they chipped and chipped away, stringing together five hits and taking the lead. How much more evidence do you need that the magic is back than the fact that GRADY SIZEMORE KNOCKED IN WHAT TURNED OUT TO BE THE WINNING RUN and then, right after that, JACKIE BRADLEY JUNIOR DELIVERED A CLUTCH HIT TO GIVE US TWO INSURANCE RUNS. That is some near-improbable stuff, happening right before our eyes. What’s next? Flying machines?

Oh, and this happened:

Two in a row, people. Two in a row. Do I hear three? Do we dare dream it? We’re only eight games back in the East, and it’s only May. The season’s just getting started.

Next post The Surviving Grady Red Sox Podcast: Talking to People About 2004, with Guest Bill Janovitz

Previous post Did David Ortiz Tell Some Braves Fans He Was About to Go Yard?