A Fistful of Lackeys 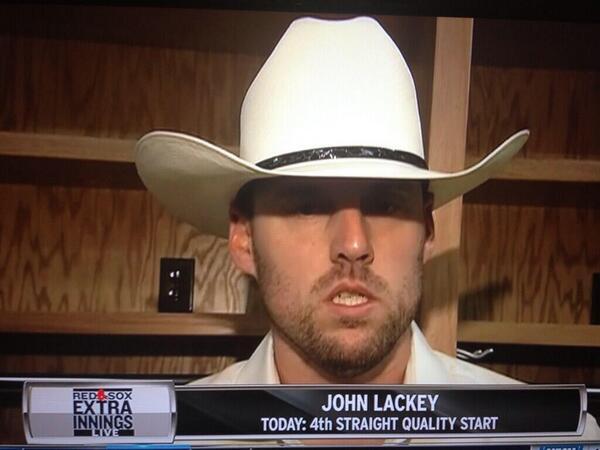 So the Red Sox have lost seven games in a row. Even worse, as a number of astute folks have pointed out, their current record is actually worse than it was at this stage in the Bobby V era. The starting pitching has been looking rather Vaughn Eshelman-esque. The hits don’t come when we need the hits to come. And this weekend’s series between the Sox and Rays is pretty much a battle for last place.

So who better to have on the mound than that guy up there in the cowboy hat.

My not-so-bold prediction is that the next stage of the John Lackey Revival Tour, which already includes a stellar 2013 ALCS victory and the World Series clincher at Fenway, will be snapping this god awful stretch of losses and getting the Sox back on track. Yes, I know my predictions so far this season have been for shit. But I also know that cheap booze heightens my extra-sensory perception. So f$%k you, stats and science.

Seriously, though, this is just the job for Lackey. Let him wear the goddam hat and carry a .45 in his jock if it makes him feel more at home. I just want to see a win. Anything to lift our spirits and change our fortunes.

This season isn’t over by a long shot. I beg you, John Lackey, to make it stop feeling like it is.