Best Walk-off Against the Reds Since 1975 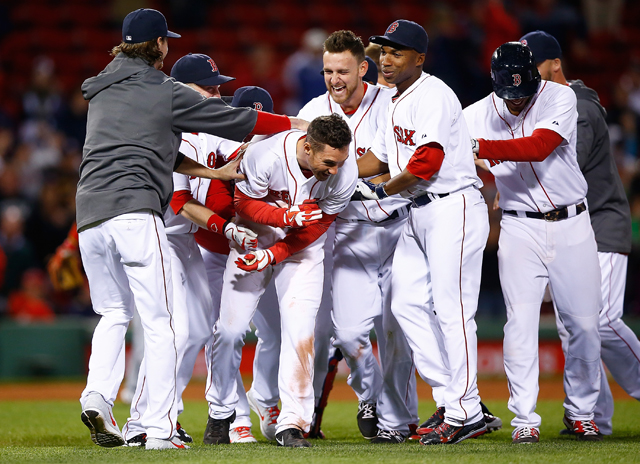 With the Reds in town and the constant reminders of Carlton Fisk’s famous home run in game six of the ’75 World Series, I kinda had the feeling that last night’s game was going to end in a walk-off of some sort. Although in my mind it was Dustin Pedroia furiously waving one fair as he jumped down the first base line as Fenway erupted in chaos and Heidi Watney asked me if I wanted another whiskey and soda, the answer to which is always “yes.”

That said, I’ll certainly take a walk-off hit from Grady Sizemore in the bottom of the 12th, especially with Sunday’s extra inning loss still replaying in the back of my mind.

I hate to use the term “must win” for an interleague game in early May. But after dropping a chance to blow it open in the third, when we had three walks, two hits and loaded the bases with only one out yet scored only twice, I started envisioning the type of loss that we’d look back on in September with vodka-soaked regret.

Thankfully, even as the game crawled on toward midnight, the Sox bullpen and Grady Sizemore teamed up to save the day. Or the evening.

Let me say that that’s exactly what this team needed right now. And what my ulcer needed, quite frankly. I’m sure my memory is flawed, but it seemed that by this time least season, we already had, like, 47 walk-off wins. Seeing Gomes hoisting Sizemore up off the ground reminded me that hope is still a good thing.

And I hope — man, I hope — that this is the start of something big.