How to Solve That Crimea Problem, Red Sox Style 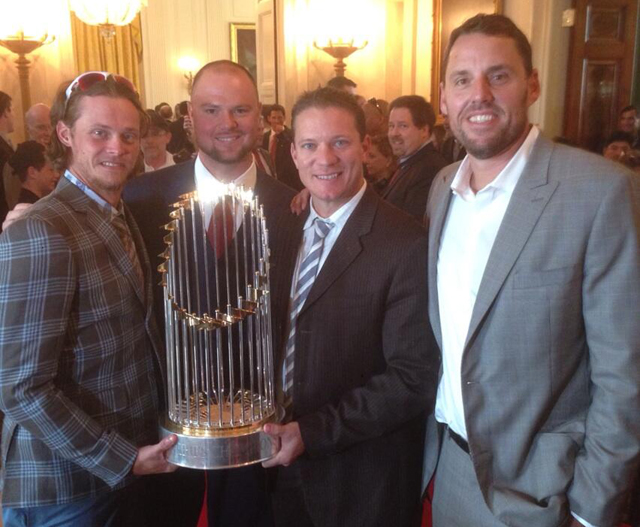 The photo above, from Jake Peavy’s Twitter feed, tells you everything you need to know about what kind of firepower was available to the Commander in Chief during the Red Sox’ White House visit. Lester’s all business, Peavy’s doing his best “booking agent for .38 Special” and Lackey looks like he’s itching to sample D.C.’s nightlife right after he’s done. Best of all, of course, is Clay, who seems to have dressed for his cousin’s high-school graduation party.

Regardless, these guys can buy and sell me a million times over so who am I to judge their sartorial sense. All I know is that if the President wanted to keep Putin’s New Soviet Union in check, they should have gotten these four on the case, like an MLB verison of The A-Team. Good luck annexing Crimea when the Lackster’s firing 95mph heaters at your nutsack.

Meanwhile, a bit of furor has arisen over news that the most celebrated selfie from yesterday’s proceedings, the one featuring Ortiz and Barack Obama, was a staged product placement.

What an honor! Thanks for the #selfie, @BarackObama pic.twitter.com/y5Ww74sEID

To that I say who cares? The photo was aces. The bigger question, to me, is how Marvel missed the chance to publicize Captain America: The Winter Soldier on Jonny Gomes’ jacket.

Next post Sox Win, Thanks to Lackey, Home Runs and Beard Pulling