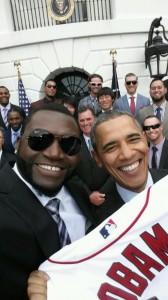 The closest thing we can come to a scandal around here is whether or not David Ortiz “premeditated” the presidential selfie? I think we know, based on one of his teammates yelling “cha-ching” in the background, that this was indeed part of Papi’s world domination master plane. And to that I heartily say, who gives a rat’s ass?

Well, okay, the White House does. But who among us cares? Ortiz could have shoved his hand up Obama’s ass and used him as a hand-puppet and I would still bow to him. Obama may run the free world, but Ortiz runs our baseball world. This is his f#&king city.

On another note, Red Sox win again, thanks in part to three-and-two-thirds shut-out innings by the bullpen. Doubront didn’t suck, he got the win, but he ran out of gas after an 11-pitch battle with Adam Jones in the sixth. The Red Sox hammered out 14 hits but only had four runs to show for it. The LOBs continue to pile up, but a win’s a win (I just made that up, feel free to use it) and you can almost feel the timely hits coming and a 12-run game on the horizon.

Home Opener, rings, and much rejoicing at Fenway today!