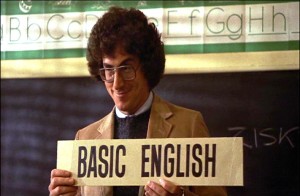 The world lost one of the good ones in Harold Ramis. His talent was immense and largely unnoticed. Most people know him as one of the goofy guys in Ghostbusters. My favorite role was Russell Zisky in Stripes. But Ramis was so much more than straight man for Bill Murray.

Ramis was the genius behind the camera for such classics as Caddyshack, Vacation and Groundhog Day. He also wrote the screenplays for many of those, as well as Animal House, Meatballs, Back to School and Analyze This. Basically, anyone growing up in the seventies and eighties probably laughed their asses off at something Harold Ramis created. He was as much a part of my childhood as my own friends, and his comedic brilliance will live forever in my memory.