The World Series vs. My Brilliant Career 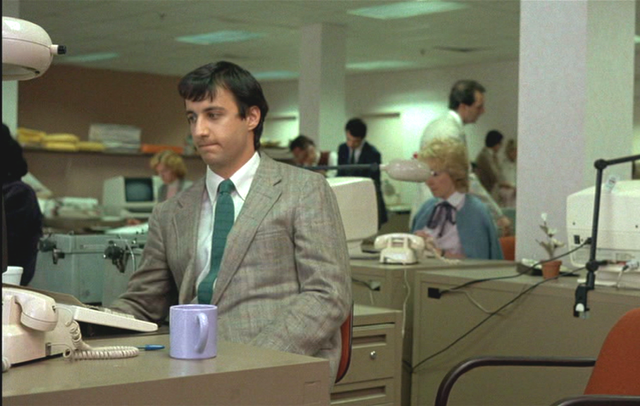 I spent the better part of last week in Dallas on business, which severely limited my access to the first two games of the World Series. Bad enough I’d forgotten the time zone switcheroo that had the games starting an hour earlier in my neck of the woods, but my schedule was so packed with meetings and dinners that I was unable to break away to watch even a minute of game two.

Not that I missed anything there. But more on that later.

Part of my duties on Wednesday called for working our company’s booth at the conference exhibit hall from 5 to 9pm. As this would eat into a good chunk of game one, I had already formulated an escape plan: checking my phone, saying something out loud about “The Mersky Proposal” and how someone needed my help, then dashing off the nearest pub to catch the game. As I got to the exhibit hall, I noticed that former Red Sox pitcher Mike Torrez was signing autographs, and I went up and shook his hand.

“You’re from Boston, huh?” he asked asked as he signed a photo for me. “You must be in your glory right now.”

I was. Until I realized the photo he signed for me showed Torrez in pinstripes from his time with the World Champion 77 Yankees. 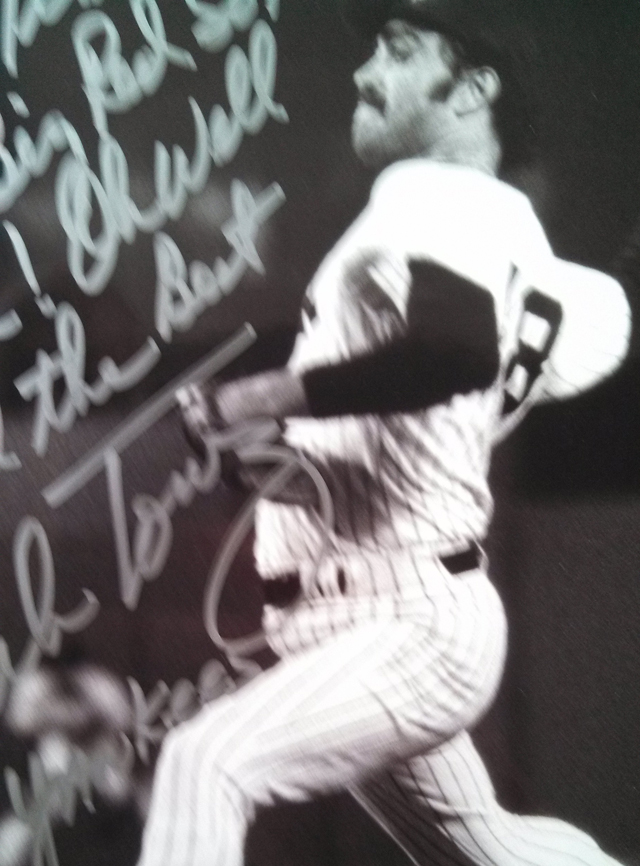 Later, when I arrived at our booth to perform at least some of my duties before enacting the master plan, a superior met we with an ominous greeting.

“I imagine right around game time you’ll come down with something, huh?”

My master plan put on ice, I resigned myself to following the game on my phone with MLB.com’s live pitch tracker, which is only slightly superior to listening to 1930s radio announcers read game updates off the ticker wire. Turns out I didn’t need to worry: some enterprising lads a couple booths away had turned their AV monitors into widescreen TVs with the World Series in full effect. Once the Sox were well ahead, I escaped with some coworkers to a local burger bar to watch the last couple innings.

Watching the #redsox in the World Series in a bar in Dallas. http://t.co/fzxjSdtjQY

That solved my game one problem. Game two was gonna be tougher, as we were entertaining clients at dinner. This time I had to rely on the smartphone, which was discreetly placed on my chair between my legs. Sure, everyone at dinner thought I was sneering at my crotch for most of the night. But that’s nothing new to them. Sadly.

The results of that game cast a pall over me for the remainder of the week. And I still hope it’s not the game that comes back to haunt us. Going into St. Louis up 2-0 would have not only shaken their faith and gotten the fear of a 2004-esque sweep into their heads, it would have also ensured that even if everything went to shit on the Cards’ turf–which, unfortunately, is a possibility with Peavy and a tentative Buchholz on the hill–we’d still get to bring it back to Boston.

Assigning blame for that loss really does nothing to ease the pain. But we still gotta do it, in order of culpability:

Craig Breslow: That errant throw to third base literally threw the game away. If Breslow holds on to the ball, at worst, we have a tie. Instead, he’s set himself up to be this World Series’ Bill Buckner if we don’t recover.

Jonny Gomes: I love me some Gomes. And his head-first slide into first base in game two of the ALCS shows the grit and determination with which he plays. But a good throw to the plate nails Kozma coming home with the tying run in the top of the seventh. End of story.

John Lackey: A horse throughout the playoffs, and his ALCS heroics were key to stumping the Tigers. But when your offense gets you the lead, you can’t be walking batters the very next inning.

The Bottom Part of the Order: I don’t know about you, but I’ve come to just write off Salty, Drew and Bogaerts as automatic outs. And I hate automatic outs.

After dinner, I limped back to my hotel room and sifted through some websites and ESPN recaps until I passed out, a sick glow of what-could-have-been bringing me uneasy dreams.

Boarding my flight back to Boston last night, I realized how oddly detached I’ve felt from the first couple games. Being in a city with no skin in the game makes it seem like just another week. But as we were prepping for flight, the pilot announced, “Welcome to JetBlue, official airline of the soon-to-be World Champion Boston Red Sox” and the whole plane erupted into applause.

Now I’m back home. And all amped up. And ready to see the Sox make good on that pilot’s prediction.

Next post By the Power of Ryan Dempster's Suit, the Red Sox Will Prevail! 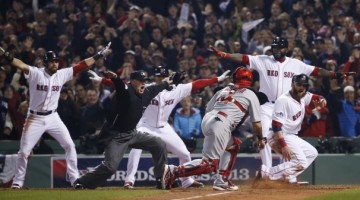 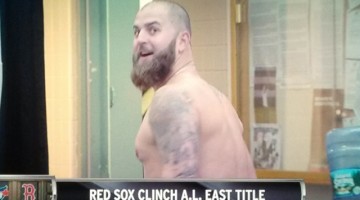