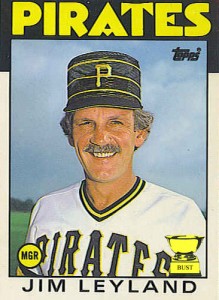 Here’s the deal: this is the post-season, the opponent is the enemy. That means I don’t tip my cap to anyone. I get pissed and want the next game to start immediately. So without getting into the ugly details of a 1-0 loss, there are a few things I don’t understand.

How does a guy like Joe West buy dress shirts? You really can’t tell where his jowls end and whatever is under his chest protector begins. It’s just some vague, fleshy neverland.

Why did Drew hit with bases loaded? Why?

On to game two. Scherzer scares me, but Papi owns him so we’ll see. And just what is Leyland hiding under that hat?