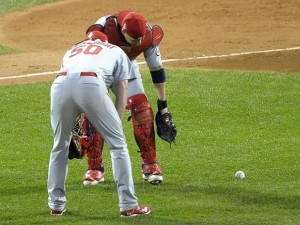 I’m calling it now, Red Sox will sweep the Cardinals. That was one of the most embarrassing excuses for a baseball game I have seen in a long, long time. In game one of the 2004 Series, the Sox made four errors and still won the game. The Cardinals just don’t have it in them to come back from this. They collectively crapped their pants last night, I don’t expect anything better with a rookie pitcher on the mound and even more pressure being down 1-0.

I have lost complete respect for Carlos Beltran. Sixteen years in the bigs, he finally makes it to the World Series, and he pulls himself out of game one with a “contusion.” For those of you not in the medical profession, that’s a bruise. For those of you with young children, it’s an ouchie, or a boo-boo. Rub some dirt on it and play through it. That type of quit in one of their veterans is another reason they have no shot.

None of these have any bearing on anything, that’s why they call them fun facts. One hour from now, the game two massacre begins. Pants optional.

Next post The World Series vs. My Brilliant Career