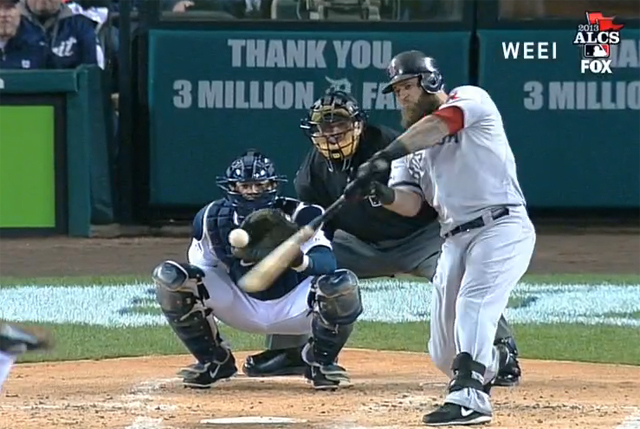 Watching tonight’s game conjured all those memories of playoff baseball: the pacing, the drinking, flailing my fists at the wall, and urinating out the window because you don’t want to miss a minute of the game running to the can. It may not have been an “official” must-win for the Sox, but with the prospects of heading back to Fenway to face Scherzer and Verlander, Game Five was as close to a must-win as you could get.

Thankfully, the bats came through early, with Napoli going yard and doubles by Bogaerts (!) and Ross and a single by Ellsbury spotting us a 4-0 lead in the second. Naps was truly the comeback kid tonight, going 3-for-4 and attacking the ball with the same fervor he tackles cold beers, sandwiches and hookers.

The following inning, Naps was on third with two outs when Drew came to the plate. Amazingly, Naps came in to score, but lest you start talking crazy, no, Drew didn’t knock him in. Instead, the run was plated on an Anibal Sanchez wild pitch. After that, the Earth returned to normalcy, and Drew promptly struck out. Again.

Detroit didn’t do themselves any favors, with Miggy running into an easy out at home in the first inning and Prince Fielder being a non-entity. Still, their bats kept pecking away, making it a harrowing, one-run game for the last four innings, as Farrell turned from Lester to Tazawa, Breslow and Koji.

In the end, the Sox prevailed. And we exhaled. And so did Koji:

With one game to win this weekend, I like our chances. It won’t be easy. But nothing awesome ever is.