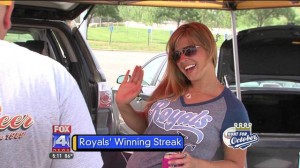 These Kansas City Royals have turned out to be quite the pesky bunch. How dare they turn the tables on us, taking a 6-3 deficit  and turning it into a 9-6 victory. That’s what we do, not what is done to us. Let’s face it, six runs and eleven hits is generally a win, but Peavy fell apart early and two guys I never heard of (Drake Britton and Pedro Beato) did the rest. The Rays are winning in the eighth and that means the lead is most likely going to be back to one game. The Sox jumped all over starter Ervin Santana, but it was Francisley Bueno’s work out of the pen that stifled the Red Sox offense. Guess what…he’s a lefty, and his name means “good” in Spanish. Tough to fight that.

Tonight, the Red Sox face another tough pitcher in Jeremy Guthrie. Thankfully he doesn’t throw with the Devil’s hand, but he can still get guys out. And we’ve got the secret weapon, the other Felix, Doubront on the hill. No way this team is losing three in a row to the Royals.

Previous post The Adventures of Ellsbury 'n' Elf: The Beard That Came Between Them