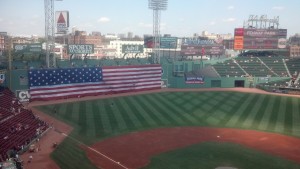 The Red Sox completed a three-game sweep of the hapless Padres behind an 18-hit attack. The eight run barrage earned Allen Webster his first win in the bigs. The win also capped off the Red Sox home stand with an 8-1 record and started putting some distance between themselves and the rest of the AL East.

The Red Sox had eight batters with multiple hit games, including home runs by Jacoby Ellsbury and Brandon Snyder. Webster went six innings for the win, and while he wasn’t overpowering, you really don’t have to be against the Padres. They are batting just .246 as a team and have just one batter with an average over .300. In other words, they kind of suck.

The Sox head out for the always-tough west coast trip. Three against the Angels this weekend, four in Seattle and three in Oakland leading into the All Star break. After that, it’s consecutive series against the Yankees, the Rays and the Orioles. July will not be an easy month.

I look at this team and I honestly don’t see how they are doing what they are doing. But they just keep doing it, and I’m okay with that. I mean, I don’t understand how Rob Schneider has an acting career, so what do I know. See you for some late night baseball with Felix Doubront.