If You Can’t Stand The Heat 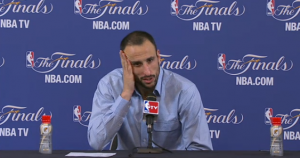 The Spurs went back to Miami leading the NBA Finals three games to two. Manu Ginobili turned the ball over eight times (two in overtime) in game six, leading to a crushing overtime loss for the Spurs. In game seven, he had three fourth quarter turnovers that iced the game – and the championship – for the Heat.

LeBron should hand his Finals MVP award to Ginobili.