You Know Things Are Going Right When… 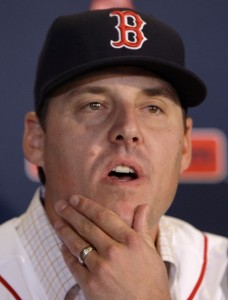 Listen, I’ll give the devil his due, Lackey pitched a good game yesterday. With two outs in the first, he gave up back-to-back walks and an RBI single and it looked like it was going to be another Lackey day. But over the next five innings, he scattered just four more hits and didn’t walk another batter. The result: Lackey’s first “W” since the 2011 season.

I’m just not ready to forgive a year and a half of sucking and bad attitude over six good innings. When you get right down to it, all he did was shutdown a seven-win team with the worst record in the American League. To do that, one just has to throw the ball towards the plate and let the natural inabilities of the Astros do the rest.

Lackey’s next start will likely be against the Texas Rangers. If he can get through five innings without giving up more than four runs, I’ll be impressed. Keep in mind Red’s bold (aka drunken) prediction that Lackey will win twenty this year. I’m not planning on using my Cy Young vote on him.

No, I don’t really have a Cy Young vote.