This is Whose City? 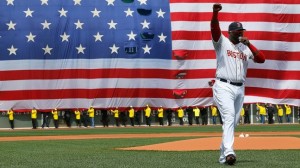 We all know what Big Papi said in response to a couple of chicken-shit terrorists messing with Boston. But for almost ten years now, it’s been his f**king city. He has been the face, voice, and personality of the Red Sox since he blasted 31 home runs and stole the DH job from Jeremy Giambi in 2003. Not to take anything away from the Large Father, I think I could have beat out the lesser Giambi brother. But that’s a story for a different day.

When the front office re-signed Ortiz for two years, twenty-six million dollars (during an off-season he was recovering from an injury), many people called it a PR signing. Many of those doubters still blather on daily on a Boston sports radio station that few people listen to anymore. Last night, Ortiz silenced them as he has always done, with his bat.

More important, the Sox crushed a crappy Houston team and notched their 15th win of the young season. Oh, and Clay “Cy Young” Buchholz coasted to his 5th win and remains undefeated. This weekend could very well be a sweep that gives the team a little breathing room in the division early on.

And to go along with all of that, this team is 2004-esque in terms of its grittiness and likability. So nice to have them back after the past year and a half.

Next post It Almost Doesn't Seem Fair. But It Is Awesome.