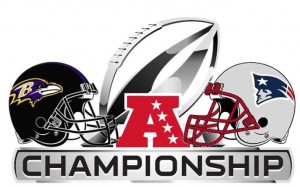 There are so many reasons I want the Patriots to win this game. First and foremost: Brady and Belichick need at least one more Superbowl win together. It has been eight years since the last one including two losses to the Giants in the big game. Brady was 9-0 in post-season to start his career, he is 8-6 since. That’s not the legacy anyone wants to remember.

On the other side of the coin, there are so many reasons to want the Ravens to lose. Ray Lewis, Ray Lewis and Ray Lewis. Who wants to hear about this murderer for another two weeks? And does anybody really want to see the Harbaugh Bowl?

Next post Mike Napoli Emerges from Phantom Zone, Gets Signed for One Year

Previous post Chapters We Probably Won't See in Francona's Book, But Would Be Awesome Nonetheless