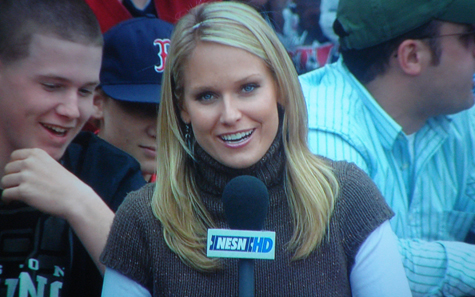 Dudes, eyes on the field! There’s a game happening!

Last summer, as Bobby V led the Red Sox through the AL East with all the grace and precision of a blind guy trying to parallel park a Greyhound bus on Mass Ave at rush hour during a meteor shower/missile attack, I knew that something was missing. No, it wasn’t charm or class or motivation — although those things were definitely in short supply from the Sox clubhouse to the front office.

It was Heidi Watney.

With all respect to Jenny Dell, Heidi was my security blanket. As the summer of 2011 turned sour and tears fell from my giant stone carving of Mike Timlin (an homage, I’m guessing, to the credit-roll scene of Battle for the Planet of the Apes where Caesar’s statue cries), Heidi helped take the pain away. No matter how badly the Sox flailed, she was there. On the third base line. Whisking me away to worlds uncluttered by Carl Crawford, Joey Gathright, Bobby Jenks and Erik Bedard. Staring longingly into my eyes as we co-signed a mortgage on the beachfront gift shop at Laguna. Spending all our earnings on stilettos and skin-tight jeans. Looking positively fetching in that cherry pink Cadillac convertible we’d take for seemingly endless Sunday rides down the coast. Bento lunches at her side and a minidress that matched the drop top. Those were days filled with magic and intensity and passion and cocaine (for me, mostly as a Twinkies chaser) and perfume and lipstick and blue eyes and Dan Wheeler. And I will never forget what they meant to me.

Anyway, when she packed up and headed for the left coast to cover the Lakers or the Galaxy or whatever she was doing out there, I kinda spiraled. Unless your definition of “spiraled” doesn’t include putting a blond wig on a hatrack and sitting alongside it on the patio, discussing aborted dreams, broken promises and whether or not Alfredo Aceves ever killed a guy with his bare hands. Going Watney Cold Turkey was tougher on me than the news that they’d killed plans for a third “Three Men and a Baby” movie. Accompanied by the single worst Red Sox season of my lifetime (coincidence?), it became a cocktail for disaster. Or at least taking, like, eight sick days from work in a row and refusing to wear pants for any of them.

But now, in answer to my prayers, she’s back. Come January, Heidi will be gracing our screens at the MLB Network, home of Hazel Mae and Kevin Meelar and Kirk Gibson/Dennis Eckersley: Ultimate Cage Match.

So it’s not NESN. This isn’t a perfect world and I accept that. But it gives me great comfort to know that next summer, for every bullpen implosion and John Farrell head-scratcher, we can find solace with just a click of the remote.