The Return of Heidi Watney 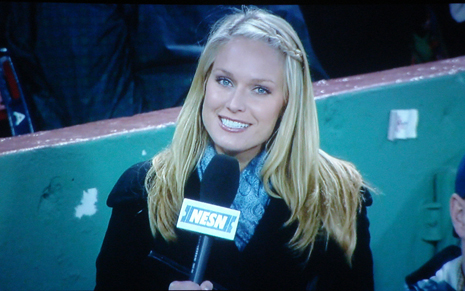 I’ll be honest: When Heidi Watney first showed up on my TV screen, I tried to play it cool. In the span of five years we’d lost Krisily and Hazel and Tina and I’d learned that any relationship with a NESN personality not named “Remy” would be a fleeting thing.

But over time, she kicked down the walls. Got in my head. As I’ve said before, the only thing that saved me from putting my Irish fists through the TV last September was the knowledge that through every wretched Lackey start, every GIDP from Crawford and every bullpen meltdown, the Magic of Watney would be there to take away the pain. Somehow she made even the most turgid, balls-in-the-waffle-iron games enjoyable, whether she was flashing that Osmond-caliber smile, hustling her magnificently aerobicized ass to the post-game scrum for interviews, joshing with Don and Jerry, or good-naturedly sampling questionable foods from other ballparks for our between-innings entertainment. Even though my eyes were on the Sox, my head was in a top-down convertible rolling down route 95 with Heidi at my side, a cooler full of Hamm’s in the trunk, and enough Van Halen on the radio to get us clear across the state.

In the blur of completely made-up passion, I forgot that things like this aren’t meant to last. Accordingly, after the 2011 season crashed down all around us in flames, young Heidi announced she’d be leaving NESN to go back home to California. And my pale, nerdish heart crumbled to dust.

The good news is that Heidi will be coming back to Boston – albeit temporarily – to participate in Project Cupid’s Charity Date Auction on February 11. And, apparently under the influence of all that west coast air, she agreed to chat on the phone with me about her impeding return. Parts of our conversation are presented here for your reading pleasure:

Red: I don’t want to dwell on your leaving NESN, but I will say this: You will be missed.

Heidi: Well, thank you. That actually means a lot to me because it’s a very rewarding and fun job but it’s also a long season and it can be tiring at times and it’s nice to know that you had an impact. My family was a big part of the reason I decided to come back to California. I have six nieces and nephews that are six and under and they kept asking me to come home.

Red: Despite the fact it’s a job, and sportscasters like yourself move from town to town all the time, are there things that you’ll miss about Boston?

Heidi: Oh, I already miss it. When you become as immersed in the Red Sox culture and the Red Sox family as I was for four years, it’s not just something that you pick up and leave and never look back. I feel like I will always be a part of that family. It will always be a part of me, at least. It was a big part of my life with so many wonderful experiences and memories. People have asked me ‘what’s your favorite memory’ and I really cannot come up with just one because there are so many different experiences and memories that I got to have with that job and I’m just so fortunate.

Red: But we will get to see you in Boston for Project Cupid’s Charity Date Auction to benefit The Jimmy Fund, where you will be one of the bachelorettes that people can bid on. Are you excited about that?

Heidi: I am. I would do anything for The Jimmy Fund. For the years I was in Boston I had the pleasure of meeting and spending time with a lot of those kids and they are such an inspiration, so many wonderful characters especially among the teenagers who are treated there. So I said, of course, I’ll do it. But since I’m no longer in Boston, I can’t just be auctioned off and set up an open-ended date. So I gave Linda Henry a call and told her I’m trying to put together this date that’s going to be auctioned off and it’d be great if we could sweeten the pot by getting some great seats to a Sox game and without hesitation she said, no problem, you guys can have front row tickets. Then I called up the manager of Jerry’s restaurant [Remy’s Sports Bar & Grill] and told them about the date and asked if they could take care of us for dinner before the game and they said absolutely, no problem. That’s the kind of support that people have for The Jimmy Fund and for each other once you become part of that Red Sox family, and that’s something that I’m going to miss, but I still feel like I’m a part of.

Red: The fact that the Red Sox and people affiliated with the Red Sox are so quick to rally around these things is great, too, because your involvement really raises the potential for garnering sizable donations for these causes.

Heidi: And that’s something that can’t get lost in all of this. While it’s very flattering to hear people saying on Twitter that they’ll take out a second mortgage to win the date….

Heidi: [Laughs] But the great part is we’re helping the Jimmy Fund and Project Cupid and kids with cancer and I’m just so glad we were able to put this great Red Sox date together that will hopefully get a lot of money to help this cause. I think auctioning someone off for a date is a fun way to raise money. I was trying to convince some other people around town to do this and I told them, ‘What are you giving up, one night of your life to go meet a new person and enjoy someone’s company and you’re raising money for the Jimmy Fund.’ It doesn’t get any better than that.

Red: So in addition to helping a great cause, the winner gets to enjoy the game with you in John Henry’s seats. And it’s just you, right, John Henry’s not gonna try to weasel his way in there?

Red: Alright, so it’s a date with Heidi Watney, four front-row tickets to a Sox game, batting practice on the field and dinner at Remy’s. I recommend that people bid their asses off for this, because in addition to all of this good stuff, you’re helping Project Cupid and The Jimmy Fund. How can you go wrong helping sick kids? At the end of the day that’s the best thing we can all aspire to.

Heidi: That’s exactly right. I look at my 6 nieces and nephews and they’re perfectly healthy but you just never know who cancer can hit. So if there’s something we can do to help with treatment or finding a cure or easing pain, it’s absolutely worth it. If we can raise a lot of money with this date, that’d be great.

Red: Last question: I’m convinced Tom Caron has a wild side to him. Can you please tell me that at least once you’ve seen him strolling though the NESN studios with a samurai sword in one hand and a bottle of whiskey in the other?

Heidi: TC is a good dude. He is very into hockey, and now he’s doing “The Instigators” show so maybe it’s becoming more apparent to people now. He’s also a huge hockey dad, his kids play hockey and if you’re talking to him off camera it’s always about his kids’ hockey games. He’s a really smart guy. He’s not wild, though.

Heidi: I think people would be surprised to find out the real personalities of people who are on TV. Like, whatever’s been written about me, it’s out there. But I’m actually really not like that at all in real life. I mean, I have two months off and what am I doing? I’m in Fresno, California, helping to paint my sister’s house and babysitting kids every day. And I did get to take a fabulous trip with my family to Australia and New Zealand to watch my cousin [Nick Watney] in the President’s Cup. I’m more of a nerdy, stay-at-home person than this party girl that I’ve been portrayed as by a certain publication in Boston. But TC and everyone I worked with at NESN were quality people and I’ll miss that a lot.

Red: But you will be back for the Project Cupid event, which is very cool, considering that you’ve already moved back to California but have agreed to come back just to lend your support to this cause. That should inspire people to come by and check out the event even if they don’t plan on bidding.

Heidi: Agreed. I think it’s gonna be a fun night and I’m really excited to see how it turns out. And yes, even if you don’t want to make a bid, they’re only asking for a 15 dollar donation at the door. You can’t go wrong with such a great cause. I’ll be there and I’m more than happy to take pictures and hang out. So come on down.

The Project Cupid Charity Date Auction will be on Saturday, February 11 at Estate in Boston. For more info, check the PC Facebook page. And if you can’t attend but want to donate, click here.