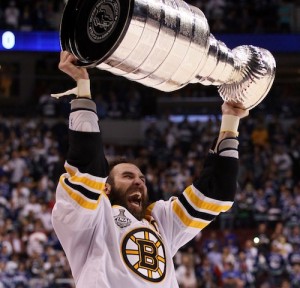 I think everybody who has been reading this blog for a while knows I’m not a hockey fan. My fondest hockey memories are of watching Bobby Orr and the Bruins teams of the early seventies, courtesy of channel 38,  on a fuzzy TV. Years later, I watched a bunch of young kids shock the world at the Olympics. Since then, not much hockey in my life. But that didn’t stop me from watching the Stanley Cup finals and seeing Boston win yet another championship. Hats off to Tim Thomas and the Bruins, and especially to all of their loyal fans – I do know a little something about what you’ve gone through waiting for this.

And congratulations to the city Boston – the dynasty continues:

A span of less than 10 years and Boston has won at least one championship in each major sport:  seven total championships. I haven’t wasted any time researching, but I doubt there is any city that has come close to doing what Boston teams have done. Imagine the generation of teenagers and young adults who have grown up knowing nothing but victory. Awesome.

And as the Red Sox continue to play great baseball, currently leading the Rays 3-2, maybe we have another champion in the making.

Next post And Now a Quick Update on the 2011 Red Sox for the Benefit of Those Who've Been Busy Watching Hockey, Courtesy of the Ellis Burks Glamour Shot

Previous post If the Commander Throws a One-Hitter But Everyone's Watching Hockey, Does It Make a Sound?