More Than Meets The Eye? 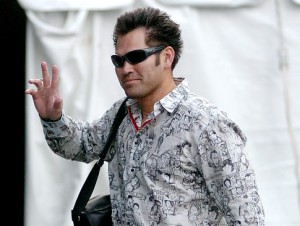 Since that dark day when Johnny Damon signed with the Yankees, just a year after helping the Red Sox win a World Series, he hasn’t exactly been the most popular ex-Red Sox player. Many people, myself included, have gone out of their way to take shots at him; caveman references, his girlie arm, his stupid quotes…it was all fair game. Even his hot wife did not escape unscathed.

But after reading Michael Silverman’s story in yesterday’s Herald, I have a little more respect for Johnny. As a child, and even into his early career, Damon struggled with a speech impediment:

His cheerful nature and go-to status as the best quote in the Red Sox clubhouse from 2002 to 2005 belied the problems he encountered before becoming a star baseball player. Growing up in Orlando, Damon said kids teased him about his stutter.

“They also knew that they couldn’t keep giving me grief where I wouldn’t pound someone,” he said. “They knew that there was only a little bit you could tease me on and I’d be, ‘All right,’ and I’d laugh with them some. But they knew if they kept going, I’d be, ‘OK, enough already.’ ”

Damon received speech therapy in elementary school, but after being drafted out of high school by the Kansas City Royals in the summer of 1992, the teen’s stammer was unmistakable. Those who knew Damon said that he had trouble maintaining eye contact while speaking. He would look at the floor when he spoke, his head sometimes shaking while trying to get words to come out.

The Royals helped him with his speech impediment, he said, and after he joined the Sox he became willing to speak out.

Maybe he isn’t such a bad guy after all, his years in the evil pinstripes excluded, of course. I do have one fond memory of Damon. I was fortunate enough to chaperon a Jimmy Fund trip to Baltimore back in 2004. A few of the players – Tek, Kapler, Leskanic – came out before the game to hang out with the kids. Johnny Damon spent more time than anyone signing autographs, posing for pictures, and just talking to the kids. I mean really talking to them. It was a very special time for many of those kids, and I was glad to be there to see it.

Might be fun seeing him in a Rays uniform this year.

Next post The Craziest Thing I've Ever Seen During a Red Sox Game?