Youk Moves to Third. And a Critical Advantage is Lost. 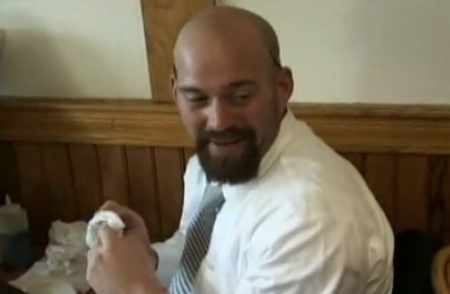 Not a "social scene" kinda guy.

There’s no doubt that by inserting Adrian Gonzalez into the line-up, the Red Sox have become a stronger offensive force. And A-Gon taking up residence at first base allows Youkbacca to flip back to third base, a position he’s more than happy with.

But I do think the Sox have lost something of a competitive edge in the deal.

To put it simply, whenever an opposing batter stepped to the plate and gazed down the line at that hulking, sweaty, hairy bastard guarding the first base bag, I like to think that he instantly decided that the last thing he’d want to do is get on base and have to spend some quality “Youk time.”

You can’t tell me that the very presence of Youk down at first — especially on a particularly hot day or after an intense sausage-eating binge — didn’t affect a batter’s psyche. “Sure, I want to get on base,” you can almost hear them thinking. “But what will that wretched creature do to me once I get to first?”

I’m certain that fear of being bitten, gassed or man-hugged into oblivion by our first-baseman positively impacted our pitchers’ strikeout ratios. If a batter has the choice between taking a wild swing at a pitch in the dirt or accidentally stepping into an impromptu re-enactment of Deliverance, it’s not hard to guess what he’s gonna choose. Not that Adrian couldn’t conjure up a similar sense of dread, but he just seems so goddam nice, I can’t imagine it.

It’s interesting to read that Youk won’t miss first base. As the afore-linked article noted, Youk “chafed at chatting up players from opposing teams,” saying, “The social scene over there I can do without. I’ve never been a social-scene kind of guy. It’s not fun.’’ I like to think that he knew damn well the edge he brought to the role, and may have even boycotted deodorant or fashioned a crude set of roast-beef undergarments just to play it up.

And while I certainly welcome the Adrian Gonzalez era, it will be interesting to see if there’s any significant decline in triples or runners stealing third against the Sox in 2011.