Josh Beckett Needs a Hug. And Only John Lackey Knows Why. 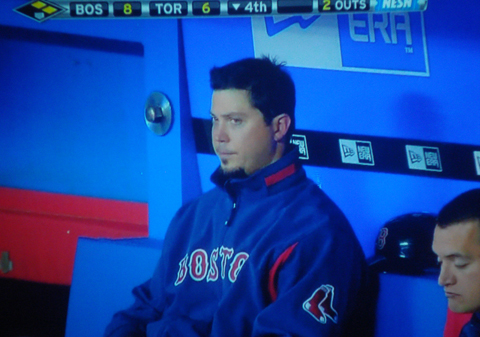 "The night does funny things inside a man. These old tomcat feelings you won't understand."

I’m so busy with my full-time gig, gambling addiction, freelance work for the CIA, efforts to legalize kangaroo prostitution and finishing my book, Gary Kroeger: The Greatest Saturday Night Live Cast Member Who Ever Lived, that I sometimes miss some great bits of Red Sox ephemera. Like a recent Valentine’s Day article on ESPN Boston in which local athletes were asked which of their teammates needed a hug.

There’s some great input from the likes of Dustin Pedroia and Jacoby Ellsbury (who, in true “Ellsbury ‘n’ Elf” fashion says his buddy Dustin could use a hug). But the most intriguing response by far comes from John Lackey: “Josh Beckett could use a hug. I can’t get into why, but he definitely needs one.”

This just sets my mind reeling. I never knew Commander Kickass to be the hug-needin’ type. But perhaps his fellow Texan has keen insight that the rest of us lack. Exactly why would Josh “definitely need” a hug? And why can Lackey not elaborate (if not for fear of retaliatory violence)?

The only reasons I can think of are:

1. Married life simply isn’t agreeing with him.
2. Guilt over killing a man with his bare hands finally bubbling to the surface.
3. Season 3 of “Sons of Anarchy” not yet available on blu-ray.
4. The missus insisted that funds earmarked for a new crossbow be used for a new washing machine.
5. Campaign of torment from angry deer looking to avenge their loved ones finally getting to him.
6. Toby Keith’s latest CD didn’t live up to expectations.
7. Recently purchased 10 gallon hat turned out to be only 8 gallons.
8. Thought of his new Ford F-150 SVT Raptor being fitted for baby seats keeping him up nights.
9. (Actually, scratch that one. I don’t buy it.)
10. Julian Tavarez blames him for something and was last seen “in the general vicinity of Texas.”

Your own theories are welcome in the comments section.

Thanks to Krys, Owen, Debbie and several commenters for the tip.