The Curious Case of Jonathan Papelbon 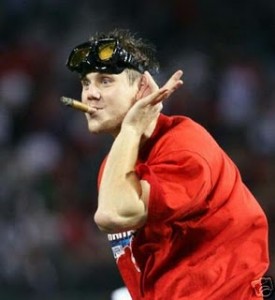 The face that launched a thousand beer bottles

After Sunday night’s game, I was prepared to launch a full-scale war against Jonathan Papelbon. In Denton-speak, that means a lot of name-calling and possibly starting some nasty rumors about his manhood, and the demand to have the Pappet burned in effigy. I was leaning toward “Stinko-Ocho” as my war cry. Then I had some quiet time to reflect (known in some circles as “protective custody”) and decided to dig a little deeper into Papelbon’s season.

The common rants on sports radio, in the media, and at the water cooler are how his hits are up, his walks and home runs are up, and his strikeouts are down. But it just isn’t accurate. Check out his numbers this year compared to last season:

The glaring numbers are ERA and blown saves…everything thing else is almost identical. To me, that means he is just not getting the “big out” when he needs it. In other words: he is choking. If it were a case of hits or walks being up or K’s being down, you might be able to point to a physical problem or mechanics. This is much more ominous. This reeks of a loss of confidence, especially when he comes out firing at the umpire.

The Daniel Bard era may be upon us.

Previous post The Ellis Burks Glamour Shot Says You Should be Thankful It Lasted This Long.