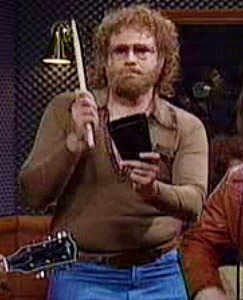 I'm the only guy who can pull off the cowbell.

Hardly a good start to a tough stretch of games. The Sox dropped a nutbuster to the Rays after chasing Matt Garza unceremoniously from the game early. Not exactly what you’d call crisp baseball with Dice-K on the mound and a couple of sloppy infield plays. Looked like a bunch of minor-leaguers out there…

The Red Sox will play 15 of their 21 remaining games in July away from Fenway. After the All Star break, the Sox head west for a three-city, ten-game swing. If the Sox can hang in there and gut out a few more series, the names should start to move over from the DL to the starting line-up, and that’s when we see what’s up with this team.

If that does happen, Francona should be named Manager of the Year at the All Star break. Somehow, he has kept this odd group of veterans, journeymen and call-ups focused and most important, winning.

Not that I’m bitter, but don’t grown men feel like asshats sitting there rattling those dumb cowbells?

Next post SG Podcast: The Most Important Home Run in Red Sox History?