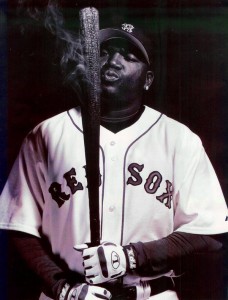 When David Ortiz launched his eighth homer of the season over the Green Monster, I decided it was official: Big Papi is back.

Ortiz spent most of last season with a black cloud over his head. If you looked close, you could see patterns in the cloud, and those patterns became words. “STEROIDS” was one, “SLUMP” was another, even “WASHED-UP” was visible at times. No longer was he the mashing Big Bat In The Line-Up. No more did he break the spirits of opposing pitchers, stomping on the best they had with a huge smile on his face. A King Kong on Happy Pills swinging a menacing bat with the sole purpose of winning games. It seemed he had ceased his fearless roar.

When he came out of the gates at a crawl (one homerun and four RBI in April and a .143 average), the Fenway Fickle had seen enough. Bench him, cut him, make Lowell the full time DH, drag Ortiz to the town square and stone him. But when May rolled around, things began to change. The five doubles he hit in April were now leaving the yard. Ground-outs into the shift were solid singles. Ortiz is batting .358 with seven homers and 17 RBI this month.

The shackles of doubt and adversity he wore last year appear to be gone. The scars are still there, harsh reminders of what could be, what will be someday. But that someday isn’t today. Our Big Papi is back.

Previous post This Country Was Built on Scrappy and Resilient. So I Won't Panic Just Yet.